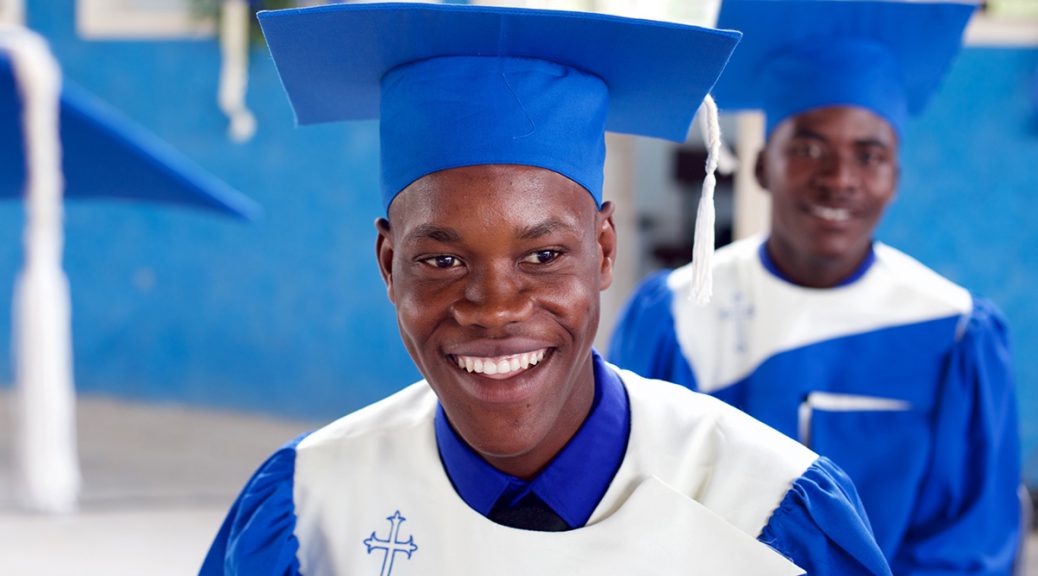 Many of the graduates of Grace Emmanuel School have dreams to further their education, but few have the resources to do so.

To continue investing in the futures of GES graduates, JiHM plans to award renewable scholarships to graduates every year who best exemplify excellence in education and a desire to serve God, their community and country.

This year, we will send 7 graduates to college or trade school. Help make career dreams come true by giving today.

Jesus in Haiti Ministries began awarding scholarships with the first graduating class in 2017. Read more about the recipients below.

Scholars receive tuition to the program of their choice, plus assistance with supplies and living expenses on a case by case basis. The estimated cost per year for one scholar for university is $3,000, and $1,000 for trade school.

For more information about the scholarship fund, please email info@jesusinhaiti.org.

Davidson became interested in agronomy while growing up in the Artibonite valley, an agricultural area located several hours away from Grace Emmanuel School.

“I want to change the environment we live in in my country,” said Davidson. He is anxious to learn how he can work to improve the soil and growing conditions of Haiti.

Davidson currently lives in Source Matelas with two of his younger brothers who attend Grace Emmanuel School. Davidson is the first person in his family to go to university.

“God has done lots in my life and He’s why I’m here today,” he said. “You won’t regret your investment in me.”

Read a spotlight on Davidson from May 2017

Steevenson was a standout at Grace Emmanuel School for his intellectual abilities and his gentle spirit. His story includes living at an orphanage for nearly a decade. When he was 16, he asked the director to locate his mom so he could return home before it was too late to have a connection with her. He still lives near his mom today, not far from the university he attends.

After considering several fields, Stevenson chose to study administration. He would like to be a director at an organization or school someday, even mentioning a desire to return to work for Jesus in Haiti Ministries to repay all the help that has been given him.

Steevenson is the first member of his family to go to college. He says his mom, who never had the opportunity to go to school, is especially proud of him.

“It gives me pleasure to say thanks a lot,” Steevenson said. “I didn’t have any hope to go to university, and you chose to help me. I guarantee I’ll do my best to make you proud.”

Read a spotlight on Steevenson from February 2017

Excerpt from his scholarship application:

“My life is a long story. I was born into a family of 6 children on La Gonâve [La Gonâve is an island off of the coast of Port-au-Prince, only accessible by boat]. Both my mother and father were farmers. At the age of 7, I started school. After my father’s death, it was not easy to continue school. Misery and disappointment were my only friends. At the age of 14, I had to become a juice seller to save money to continue my studies and pay school fees… It was not easy. But thanks to God I finished high school.

“…I have always been a good student and in the top 5 after each exam session. I have been a student who is respectful, punctual, and consistent, which has earned me the esteem and the heart of my teachers…

“Any good student must also be wise, and this wisdom allowed me to pass the government exams in the first round after graduation. Wisdom, skills, consistency, and discipline make me a good candidate to receive this scholarship.

“If I am chosen as one of the scholars, after graduation, I intend to return to Grace Emmanuel School to compensate the institution for the help I received. I am aware of the effort made by sponsors to help me. For that reason, I will first bring my contribution to the school, to JiHM as a volunteer.

“Finally, to the Haitian community, I have a debt. Since I was sponsored, I must in turn sponsor some young people from poor families in rural sections of the country, especially La Gonâve, where I come from.”

Chruvenson Sterling’s easy going personality, gentle spirit, and academic abilities earned him the respect of his classmates over the years, who chose him to be their class president for the 2017-2018 school year. Living up to expectations, Chruvenson went on to finish first in his class that year and then scored the highest of any GES graduate on the government exam given throughout the country of Haiti.

Chruvenson lives in Lafiteau with his parents and younger siblings. He is one of 11 children, landing “somewhere in the middle.” His mom provides for the family by selling used clothing.

Chruvenson’s father has not been able to work since 2013, when he was injured in an accident that left both of his legs damaged beyond repair. That same year, Chruvenson’s friend told him about Grace Emmanuel School, and he was able to find a spot in the 9th grade class and continue his education.

Chruvenson is the first person in his family to attend university. He will study business administration, with hopes to become a great business leader and create economic opportunities for Haiti. He also would like to be a diplomat and get married, eventually.

“After graduation, I will return to my community to help people who do not yet have a better life,” Chruvenson wrote on his application. “More specifically to help children who have not been to school yet, with the goal of staying in the country to help it develop.”

Chruvenson was baptized at age 10. His favorite story in the Bible is the story of Joseph. “I love the background of this story,” he said. “I feel like I have many similarities with Joseph and God has brought me success.”

Enel ranks among the brightest students in Grace Emmanuel School’s history. He wants to study human sciences and provide solutions for the development of his country, specifically how to strengthen the educational system at both the primary and university level.

“It is education that has made me a man,” Enel says. “Education makes it possible to discover our potential. It is wealth.”

Enel’s childhood was not the best, but it became a source of motivation for him. After losing a friend who was murdered for making trouble, he realized that could be him and resolved to choose a different path for his life. Access to education through Grace Emmanuel School facilitated this plan, and made him feel integrated and valued.

Enel started school late, being accepted into kindergarten at 9 years old. He adapted quickly and went on to 1st grade only 4 months later. Since then, he has ranked near the top of his class every year.

He would like to teach young people that success is possible. “Going to school is the foundation,” he believes. “After that, believe in God, work, and be rigorous and respectful.”