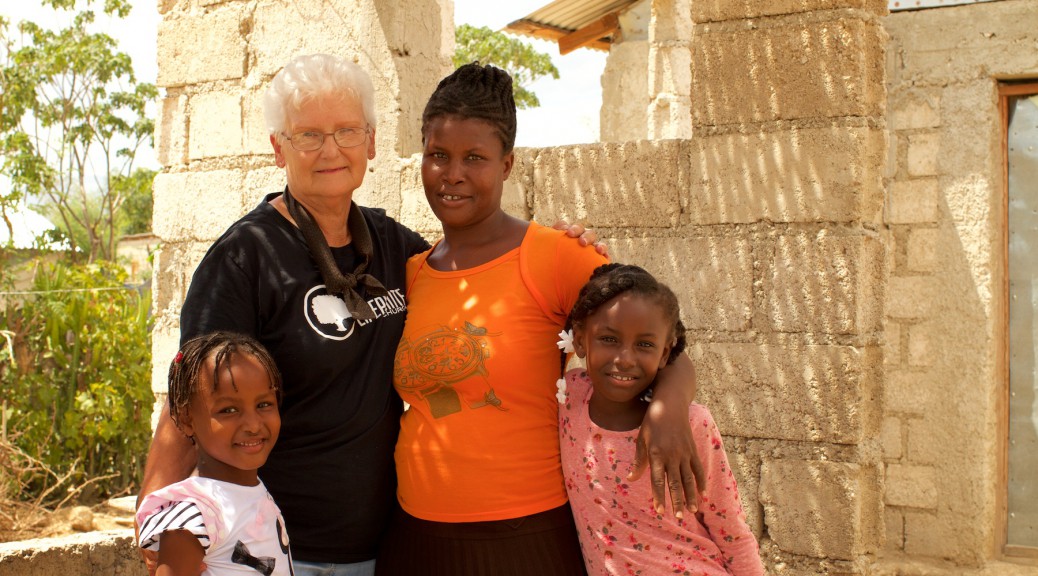 Where to start? I guess that would be in my home church, LifePointe, in Woodland, Ca. Our church has been supporting JiHM for several years and last year I felt the calling to go to Haiti but I put it on the back burner—after all, I was 72 years old!

Another year rolled around and I was a year older – the Lord was calling me again and this time I couldn’t say “no” to Him! Even though our team of 11 was mostly in their 20s (including our Pastor Cody) and full of energy and love of the Lord, I had peace about joining them on my first mission trip. (Of course, I asked everyone I met to pray for me! I felt so covered with prayer that nothing could possibly go wrong! What a blessing!)

We worked hard, played a lot, prayed together and studied His word, and most importantly, loved and were loved on by the people and children of Haiti. We were able to meet most of the children and their families at Grace Emmanuel School while helping with registration for the coming school year.

That is where I had my first glimpse of our 6-year-old Yves-Malie! (We have sponsored her since 2013.)

It was love at first sight! We hugged and kissed and just plain held each other. My command of the Creole language is very limited but I do know how to say “ou se bel” (you are beautiful) and “Mwen renmen ou” (I love you). Words were not needed though.

Two days later, a few of us including two translators (Nate and Maudeline, the school secretary) were able to visit Yves-Malie’s home, which was several communities away. We were greeted with open arms and more hugs by Yves-Malie, her sister, and mother. (Unfortunately their father was off looking for work so I didn’t get to meet him.) We delivered gifts for the whole family with much excitement and outfits were tried on and modeled by the little princess.

For a few weeks I’d had the feeling I really wanted to take a big bag of rice to the family. I was probably beginning to annoy people by asking daily about how to get that bag of rice. Well, the 50 pounds of rice did get delivered to the family on our visit and later I found out the mother had confided to our interpreter that they had just ran out of food and she hadn’t known what she was going to feed her family that week. God knew! He is so awesome!

What a great time we had while mom showed off photos in the family’s photo album and then gave a tour of the home and yard that was spotless. I cannot explain the feeling of joy that I felt in seeing this family that was so proud of their children and home. It was amazing to feel such a strong connection with them—mom talked with me in Creole like we were old friends whether there was a interpreter around or not —and I have never been hugged and kissed so much in my whole life!

My advice to you is if you feel the calling, don’t hesitate no matter your age! GO! You’ll never regret it and then you’ll REFUSE to forget it! At the very least, sponsor a child! Education for these youngsters is the only hope for Haiti. The joy you can feel in knowing you are making a difference in one child’s life is overwhelming.

My clothes are washed and repacked in the suitcase. I’m ready to go love and be loved by the people of Haiti – in His name.

Marchelle lives in Woodland, California, where she attends Lifepointe Church. She visited Haiti for the first time in August 2015.