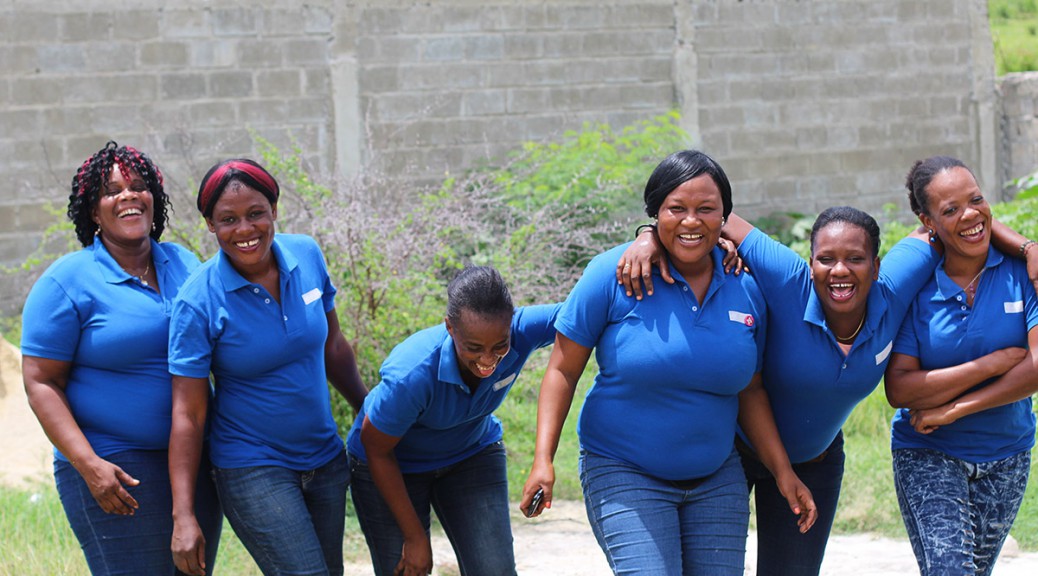 Over the last four years, I have spent many hours in the kitchen at Grace Emmanuel School. Many of my fondest memories in Haiti have taken place with the 8 women that work in that kitchen.

It was these women who taught me how to speak Creole, how to grate coconut without grating my hand, how to open a can with a knife, and how to avoid getting habanero pepper in my eyes while mixing spices.

They have let me attempt planting gardens in their yards, studied the gospel of John with my friend Dawn and me, and never failed to cheer me up when I was taking life in Haiti a little too seriously.

A place defined by people, not poverty

My first December in Haiti, I wanted to take a video on my phone to show people at home the conditions they worked in. The kitchen at the school is a 12 ft x 12 ft cement room with no ventilation, no electricity, and no light. I couldn’t believe that they prepared hundreds of meals each day in such conditions.

I explained to the ladies why I wanted a video of them in the kitchen. They agreed and I began recording.

Instead of staying in their chairs, working away in the dark, they jumped up and begin to dance and sing, bumping into each other in the small space, using spoons as drumsticks and clapping with plates. They transformed the kitchen where I had only seen darkness and poverty into a place of light and abundance of joy.

That moment was a turning point for me, when I began to celebrate life in Haiti, and reduce material poverty to only being an aspect of that life—not its definition.

Dreams of a better kitchen

About that same time, Iselande, who supervises the kitchen, drew for me her dream kitchen. I have kept it in a notebook since that day, praying that God would make it a reality.

The school was still in tents at that time, and we had no reason to believe that construction would begin anytime soon—except for our faith in a God who can do anything.

Iselande’s kitchen had a place where the kids would sit at tables to eat, a counter where the kitchen ladies could serve the food and not have to cart it around in buckets, doors at the entryway so plates and utensils could be monitored and not walk off. A garden and water tank were nearby.

In January 2014, God began to answer these prayers. Matthew 25: Ministries committed to funding a 15-classroom school, complete with offices and a kitchen with a connected cafeteria. The construction would be completed in three phases.

As classrooms were the biggest need, the cafeteria was pushed to the third phase. Iselande and the ladies kept waiting. This June when I sat with them in the kitchen, which had changed little in the last 4.5 years, I could still see a little disbelief in their eyes when we talked about the cafeteria construction. Would it really be built? After six years of cooking in that little room, would these prayers finally be answered?

Construction began shortly after that day, and in September, these women will move into a kitchen with more space, more light, more breeze, and more dignity.

I cannot wait to see how they dance the day it is done.

Enjoy these photos from the newly completed cafeteria and kitchen!