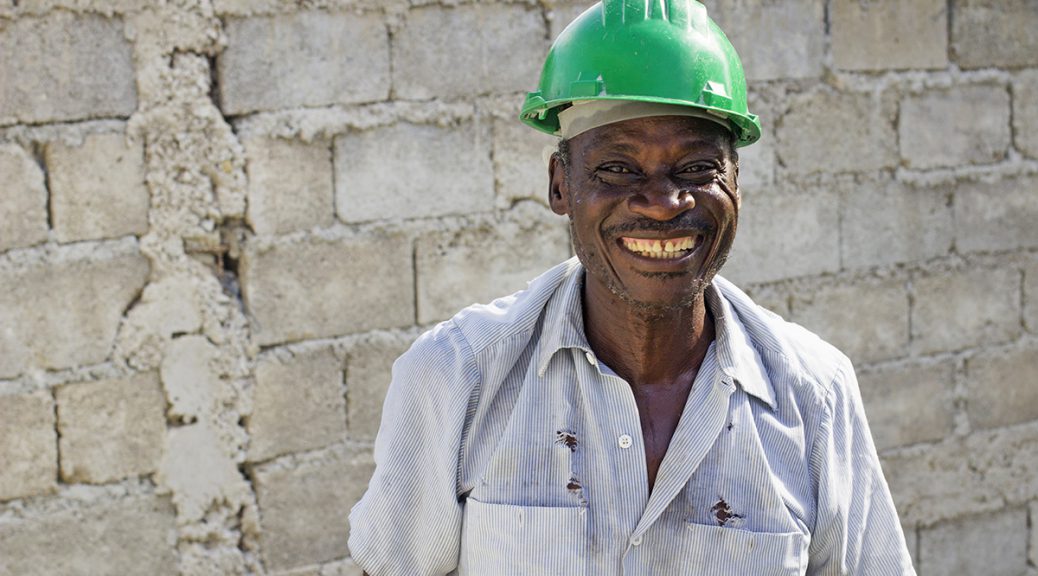 As I sit in the sponsorship office at Grace Emmanuel School, I hear a hymn, sung by a deep voice, coming through the open door.

I step outside, curious to find the source of the song. I smile to see Carnet (sounds like Kaw-NAY), one of the three men who make up JiHM’s “grounds” crew.

He is bent over, skillfully chopping down the grass with a scythe, trying to keep up with the weeds which are growing quickly this rainy season. He is singing a hymn about how much God has done for him.

I begin to talk to him, and I ask, What has God done for you, Carnet?

“Oh, so many things, cheri!” he exclaims.

He first recounts being in the middle of Port-au-Prince during the catastrophic earthquake on January 12, 2010. As he stood in the middle of a crowded street, buildings and walls fell all around him. He was unharmed. And when he reached his 7 children later, they were all okay, too.

Then in 2014, Carnet was told in a dream to go to Victory Bible Church. He heard the gospel, and he put his faith in Jesus.

About a year ago, Carnet’s house burned down. He began working at JiHM shortly thereafter, having been connected to the ministry through the church. The money he makes is going to rebuild his home.

“This work is good,” he tells me with a smile, wiping sweat from his brow.

Knowing that he labors from 7 am–3 pm in the unyielding Haitian sun, and he is not young, I ask him, doesn’t your body hurt as you work?

So Carnet sings to make the work more delightful. I ask for his favorite song, but he just says any hymn from the Haitian hymnal. These songs make him feel, in his words, “more comforted by God’s Spirit.”

Standing in the hot sun next to him, thinking of the struggle each day must hold, I think how much he must long for heaven.

To not feel physical pain anymore.

To have a house that won’t ever burn down.

To not feel the futility of work—no longer picking up trash that will just be back on the ground tomorrow, cutting down weeds that will grow back in a week.

So when I ask, what do you most look forward to in heaven?, I expect to hear one of these answers.

To live with Jesus.

I am humbled by my brother’s faith, as Carnet returns to his scythe and song to his Savior.

“Indeed, I count everything as loss because of the surpassing worth of knowing Christ Jesus my Lord.” Philippians 3:8