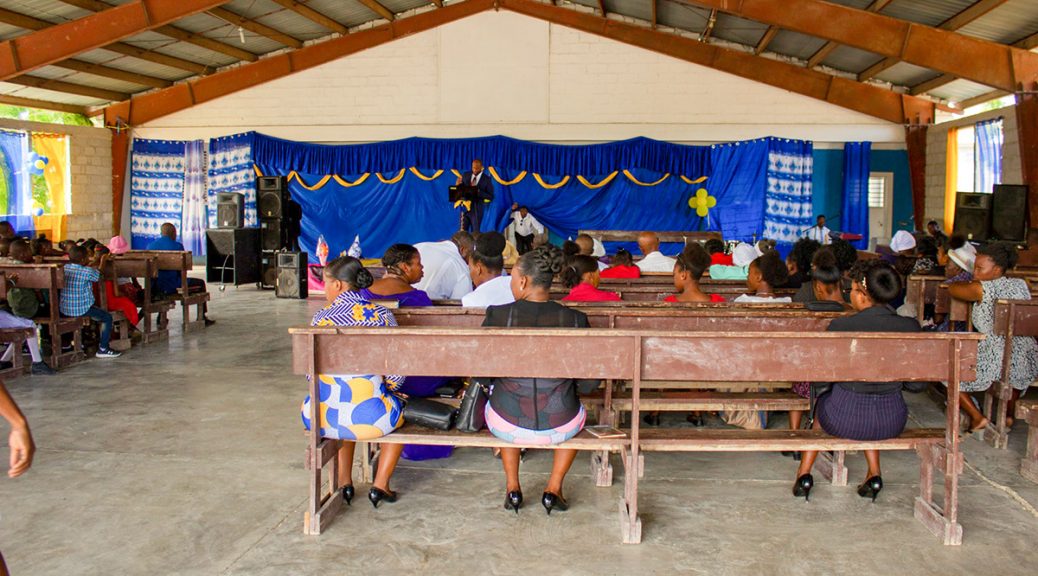 Victory Bible Church celebrated its 18th anniversary on Sunday, coming together to praise God for His faithfulness to this local body of believers for nearly two decades.

The festivities began mid-week, with the congregation gathering in the late afternoon on Thursday, Friday, and Saturday for prayer services, and culminated with celebrations on Sunday morning and afternoon.

Pastor Derson invited his friend and former college roommate, Pastor Pierre, to travel from Jacmel to preach at each of the services. Pierre taught on the power of prayer, sharing that prayer can open the heavens, raise the dead, release prisoners, summon angels, and put God’s glory on display.

The services on Sunday were filled with musical performances from four different choirs, including Victory Bible Church’s children’s choir, women’s group, and the debut performance of the new adult choir. The fourth choir visited from another local church to help VBC celebrate.

To help commemorate the anniversary, we talked with four original members of Victory Bible Church—Roger, Derson, Iselande and Stephanie—about the impact that VBC has had on their lives and in the community over the last 18 years, as well as their hopes for the future of the church.

The beginnings of VBC

Roger, JiHM’s current director of operations, was part of the ministry team that first planted the church in May of 2004.

“We had been using another church’s building to host a youth group,” said Roger. “Lots of young people were coming and giving their lives to Christ. But when we encouraged them to go to church on Sunday, they said they weren’t interested because they didn’t have fancy clothes to wear. If they didn’t wear dress pants and dresses, churches wouldn’t let them in, or would look down on them if they did let them in. So we said, we have all these people here, why don’t we just meet somewhere and have services to share the Word of God with them?”

The team reached out to another church that gave them access to their building on Saturday nights for a small stipend.

“We brought all our instruments, a sound system, and we started a service. People just came. They didn’t know who we were, they just came. They thought it was a church having a revival. People were so happy.”

Victory Bible Church grew through fellowship nights every week, evangelism in the community, and service. The ministry team held kids club in remote villages and served the elderly by carrying water for them and bringing them food.

Pastor Derson, now the senior pastor of VBC, was 13 years old when the church first met, and remembers thinking how the worship was different than any other church he had been to. As he grew, he became involved by working with the youth, going on house visits, then leading Bible studies, and finally, preaching.

Stephanie, currently the cook at the Lighthouse Children’s Home, began attending on Saturday nights because of friendships she had with the founders of the church. “I liked the way they worshipped and the teaching,” she said. She became part of the worship team early on and has remained part of it for nearly every year since.

Iselande, now Grace Emmanuel School’s sponsorship manager, was 17 years old when Victory Bible Church formed, but had been part of the youth group that planted it since she was 12. “I grew up in the ministry. I always got involved in every activity for youth group—prayer, study, evangelizing, kids club, and lots of other activities. It is a joy for me to have grown up in this ministry.”

Iselande also became part of the worship team right away. “My favorite way to participate in VBC is singing in worship,” said Iselande. “I love to sing. It’s my passion and a talent God gave me.”

The impact of VBC through the years

Through the years, Victory Bible Church has remained true to its core belief that everyone is welcome to worship God.

“VBC is unique in the way that we do things, the way we welcome people,” said Roger. “We don’t care how people come, how they look. They just feel like it’s home. There’s a lot that has gone on through the years, and it would have been easy to walk away, but here they found people who really loved them and showed it to them. We support people.”

“It’s not the same as all the other churches,” Stephanie said, “because other churches don’t accept everyone who comes to church, like men with braided hair or women in pants. At VBC, we accept everyone. You can come worship with us. Our church makes an impact because it receives everyone. No matter who you are or how you are.”

Stephanie said she personally has been impacted by the teaching at VBC. “They’ve always had good teaching, and I’ve always learned from everyone who preached, but now, I feel like I’m learning more because of the way Pastor Derson preaches, Pastor Dieuvert, Pastor Andris, and Pastor Evald. They teach in a different way than what we had before.”

Pastor Derson’s own life was changed at Victory Bible Church while he received leadership training and felt the call to preach. He remembers specifically being impacted by the teaching of Pastor Dieuvert and a visiting pastor from California, Pastor Cody, who taught from 2 Timothy 2:21 on being useful vessels in the house of God. Derson has now devoted his life to serving the Lord at this church.

“Many people’s lives have been changed through Victory Bible Church,” Derson said. “Many leaders have been developed, and many have been converted and baptized.”

Iselande is another leader who was developed by the ministry of the church. “During the time I was growing up in Victory Bible Church, I learned lots of good advice on how to become the person I wanted to be,” she said. “I always wanted to come to every program because I wanted to become a strong woman and be a model for the community where I lived. It was the ministry that taught me lots of good things for my life. That teaching continues to serve me to this day.”

The church as a family

Beyond its worship and teaching, Victory Bible Church has become a family through the years.

“Once you become part of the church,” said Stephanie, “you enter into a family. This church is a family for me. They always help me when I’m in difficult moments, with prayer and in other ways, too. I’ve stayed at VBC all these years because this is where I feel I belong.”

“My heart is here,” said Pastor Derson, “and I’ve always believed God wants me to serve Him here.”

The future of VBC

As Victory Bible church continues to grow into maturity in Christ, Roger wants the church to be an encouragement and bright light in very dark times.

“I want to continue to see our leadership step up and really lead the church, taking seriously the call to evangelize, make disciples and multiply,” he said. “Right now people feel like they’ve been abandoned by God. We need to be here to say, yes, these hard things are happening, but God is still here. Even if you don’t feel him. This really is a battle. We need to trust God and motivate each other.”

Pastor Derson’s vision is similar. He hopes “to have more leaders, for the people to love God more, for the church construction to be completed, and to make more disciples.” Simply put, he says, “The church must continue to pray, teach and make disciples.”

Roger, Derson, Stephanie, and Iselande all believe the church as a whole could be the most powerful force of change in Haiti.

“If all the churches worked together and cried out in one voice,” said Stephanie, “I believe that we could have a positive impact on the problems of this country.”

Iselande agreed. “If every church put their heads together in solidarity to pray in faith, God would change everything, because prayer opens the doors of heaven. Prayer calms the greatest wind storms.”

We are so proud of this body of believers that has weathered so many storms since 2004. To God be the glory! Happy birthday, Victory Bible Church!