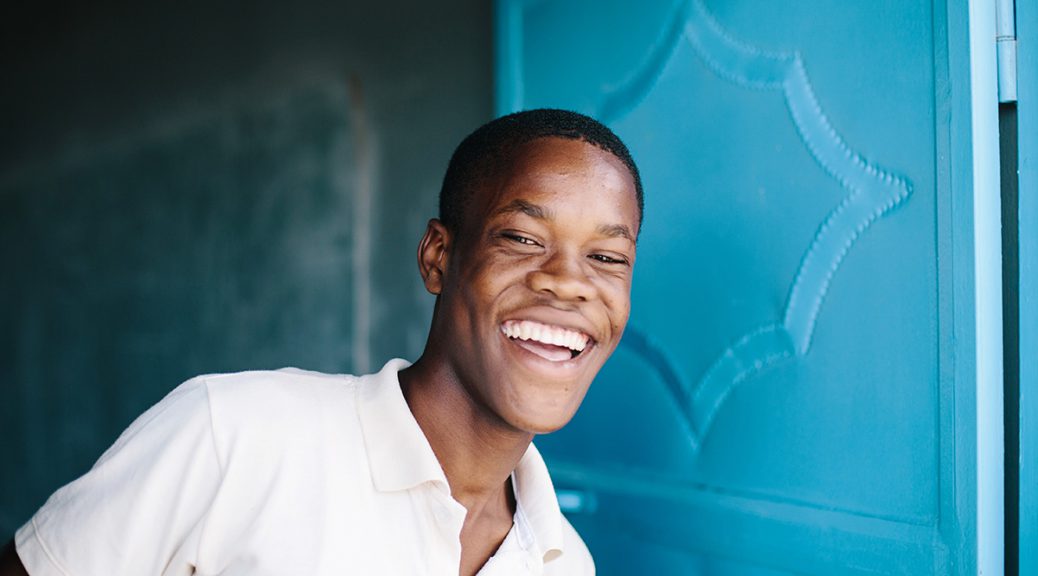 The picture perfect smile might be the first thing that draws a person to Davidson, but it doesn’t take long to fall deeper in love with the heart behind that smile.

Davidson Dorcénat is 19 years old, the second youngest of this year’s graduating class. He transferred to GES in 2014, starting in 11th grade, because the other local school he had been attending had grown too expensive for his family.

“I love it here,” he reports. “I like it a lot because it provides a good education.”

Davidson’s parents are married and live quite a distance away, beyond the Artibonite valley. They sent him to live with his sister in Source Matelas at age 15 so that he could get a better education.

“They are good parents and have always supported me in everything I’ve done,” he shares. He makes it a point to travel to see them once a month, and spends summers with them.

When asked if they would be at the graduation ceremony, Davidson answered without hesitation. “Of course!” He proudly shares that though other siblings have finished high school, he will be the first of his family to get to walk in a graduation ceremony, which aren’t held by all schools in Haiti.

A few years ago, an event occured that has given Davidson a unique gratitude for reaching this milestone. In 2014, he almost lost his life in a motorcycle accident—and still has the scars to prove it. It was then he chose to put his trust in God and become a Christian.

“If God hadn’t chose to save me, I would have died. Since that moment I belong to God.”

“If God hadn’t chose to save me, I would have died. Since that moment I belong to God.”

He was baptized soon afterward, indicating the sincerity of his faith.

“If you are in Christ, you will always be happy. If you’re not, you won’t be,” Davidson believes. “Everyone who hasn’t should give their life to Christ, because Christ lives. God is the way to life.”

After graduation, Davidson hopes to attend university to study medicine, with a desire to serve people who are sick. He’s not sure how he will afford college, but simply says, “I’m praying to God.”

His other motivation to go to college is to be able to help his family with everything.

“If my brothers have kids that can’t go to school, I want to send them to school,” he shares. “My parents don’t have a lot and I just want to help them.”

We thank God for the opportunity to provide an education for Davidson, and thank the youth group from Antioch Church in Ohio for sponsoring him over the last three years.

When his interview was finished, Davidson had his own question:

“Is my sponsor coming to graduation? I want him to come.”

Throughout this year, we’ve introduced you to several of the graduates, including Saphira, Steevenson, and Eridien. Last year, we shared Manita’s story, who has been attending Grace Emmanuel School the longest (since 2005) of all those graduating. Graduation will take place on June 21, 2017.