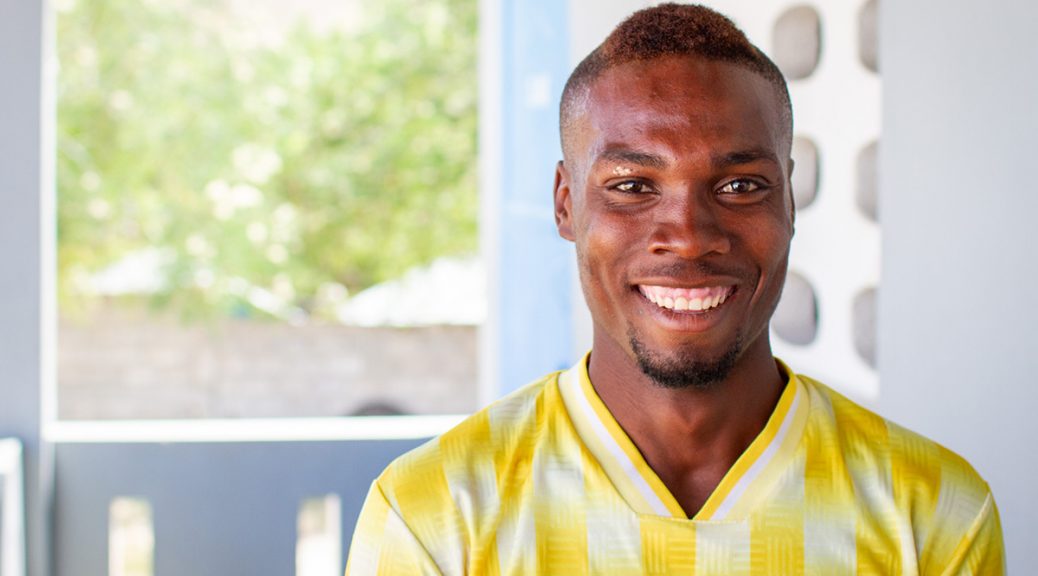 At age 25 and in his first year of high school, Carl Eric is still making up for lost time.

Because of the extreme poverty of his family, Carl Eric was 10 years old before he had his first chance to attend school in 2005. Grace Emmanuel School had opened up one year earlier, not far from where he lived in Cabaret. The tuition was free, and so just days before his 11th birthday, Carl Eric started kindergarten.

Perhaps because of his late start, learning has never come easily for him, and he has experienced many setbacks through the years, both academically and personally.

His family lost their home in massive flooding in 2008, and he lived with his grandma in makeshift shelters until JiHM became aware of his situation and helped construct a sturdier home for them in 2014.

Though materially poor, Carl Eric is not poor in family. He has good relationships with both his father and grandmother, as well as other brothers and sisters scattered between Port-au-Prince and Cabaret.

It was one of his older brothers who advised him to hold his head high no matter the difficult circumstances of his life, and with that encouragement, Carl Eric has persevered beyond nearly all of the classmates who started with him.

Through the years he has watched God provide for the school, seeing it grow from a small rented location with only a couple of grade levels, to moving to its own property with army tents for classrooms, to now a 15-classroom concrete school with every grade level.

The school has come to mean a lot to Carl Eric beyond access to education.

First, it’s provided life skills beyond a classical education. “GES teaches you a lot about how to behave in the best way to manage your life,” he said.

It has also meant additional support for his family. One of his most significant memories at school is breaking his foot during a soccer match. He was immediately worried, not knowing how his Grandmother could pay for the necessary care he would need. The school took care of all of his medical bills.

This may be why he says his favorite place at school is the nurse’s office, because Marie Lyne, the school nurse, has always welcomed him and cared for him.

Gratitude and looking ahead

Carl Eric has a lot of trust in God, especially for all the grace He has shown him in his life. Because of the grace he has received, he likes to be helpful, making himself useful to any neighbor in need and showing up at the school for volunteer opportunities to help clean the schoolyard.

As a huge soccer fan, when Carl Eric is asked to dream about the next 15 years at Grace Emmanuel School, the main thing he would like to see is continued improvements to the schoolyard, including the soccer field.

In his own future, he has big dreams of investing in the lives of children, with his greatest desire being to start a soccer club for the kids in his community.

Carl Eric has a lot of gratitude for all the supporters of the ministry for giving the gift of education to so many students.

“It’s a good work, continue on in what you are doing,” he says. “You are a blessing. To my sponsor, especially, I pray everyday for God to guide you.”