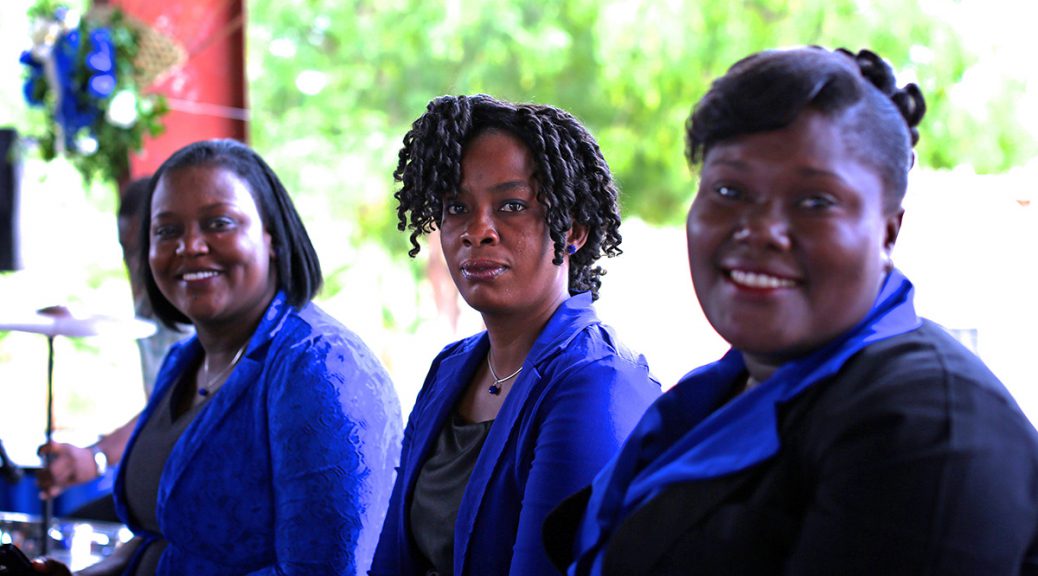 “In forty years, what would you want people to say about you?” I ask this question to Alie as we sit at her table, drinking the ice cold water bottles she has set out for us.

She thinks for awhile before responding, “I’d want them to say I stayed faithful to God, that I stayed at the feet of God. That I always worked for God.”

Then with a twinkle in her eye, she adds, “And that I make a beautiful old person.”

Alie, the head cook at Grace Emmanuel School, can come across as intimidating, often wearing a stern expression on her face. But it is never long into any day at work before she cracks a joke and has the rest of the lunch ladies busting out in laughter.

Alie has worked for JiHM since 2006, when Grace Emmanuel School met in a rented building in Cabaret. At that time, she was one of only two cooks who prepared meals for 70 students each day. She said she loves working for JiHM because of the way it operates, and because she knows she is part of meeting a great need for hundreds of kids each day.

Alie also works to help meet the needs of her own family. She and her husband, known as “Baby” by everyone in the village, have two sons who attend Grace Emmanuel School, a 5th grader named Owen and an 11th grader named Stevenson. Owen wants to become a doctor, and Stevenson, an engineer.

Alie prays and works to see these dreams come true, to give her sons opportunities that she didn’t have. Alie grew up in Source Matelas, the village where she still lives, with her mom and dad. Suddenly and tragically, she lost her dad when she was 16, and her mom when she was 18. Without their support, she was never able to finish high school.

“My dad loved me a lot. He made me laugh,” she remembers with a fondness that the years have not erased. “My mom, too. They took me to church.” Her mom was her role model, and taught her how to cook.

Both her parents’ sense of humor and their faith have been passed down to their daughter. Alie became a Christian at age 17 in youth group, and started attending Victory Bible Church in 2006, but it has only been in the last few years that her faith has come alive. She finally married her husband, whom she has been with for twenty years, in December 2016, “to honor God.” Shortly after that, she was baptized in the Caribbean Sea.

Now Alie is always at church when anything is going on, whether it’s Sunday School, a women’s event, or prayer meeting.

“God has done lots for me. Since my mom and dad died, he has taken care of me,” Alie shares. “He sent JiHM to help us, and give us work. I thank God for that. Not everyone has the chance. Lots of people wake up every day with nothing to do. I thank God for what I do.”

Alie’s prayer for Haiti is that people would turn to Jesus, and that there would be less people living in the streets.

“And I’d like electricity, too,” she says, again with a twinkle in her eye.