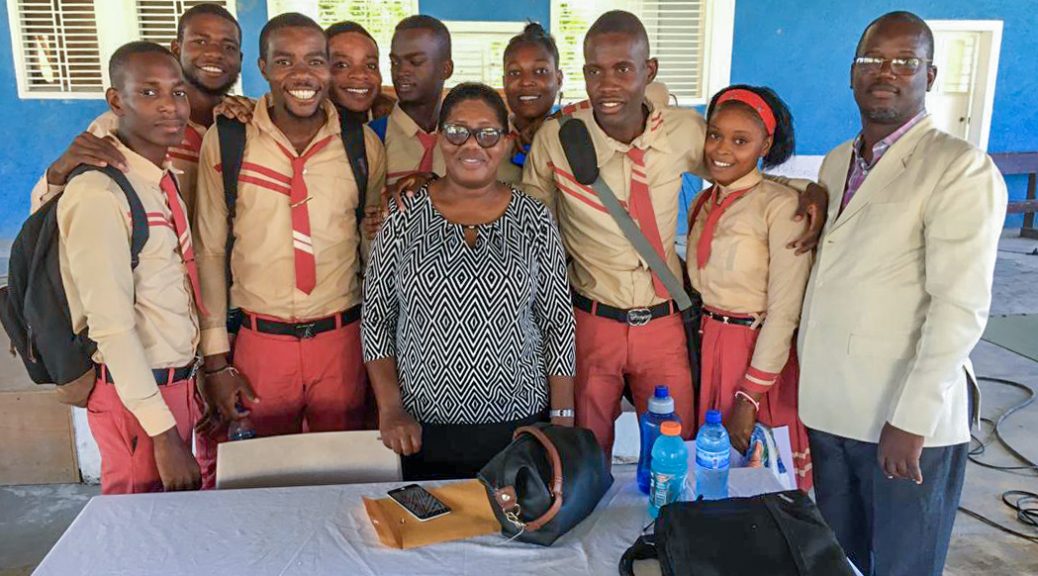 It is hard to overestimate the important role that radio plays in Haiti. For most Haitians, radio is the most accessible source of news, as well as soccer matches, songs, and sermons. Haitian radio also brings the whole country together at 8am every weekday, when every station pauses its programming to play Haiti’s national anthem.

One of the most well-recognized voices on radio stations in Haiti is meteorologist Chrisnette St Georges. Broadcast on nearly every station, she updates hundreds of thousands of Haitians every morning on what they can expect from the weather that day.

So it was with much excitement among the student body at Grace Emmanuel School that Chrisnette stopped in for a special visit on November 27. During her time with the students, she taught about weather and the environment—and took a few minutes to smile for photos with the kids.

Andris Sanon, GES Director, had made the connection with Chrisnette to visit the school via a mutual friend. It is part of his goal to inspire the kids of Grace Emmanuel School to dream big and work hard.

“These visits allow children to experience a series of people in Haitian society who have succeeded, yet are from the same social class as them,” he said.

Emilien Lafaite, a senior at GES this year, wants to become a meteorologist. “For me it was a pleasure to meet Chrisnette St Georges face to face. I always hear her on the radio. I really like her field of study and that’s what I want to study after school to help my country.”

Chrisnette gave Emilien some documents and books for him to study about meteorology. “It was a very exciting day,” he said beaming. “I felt very happy.”

A couple of weeks later, on December 11, Grace Emmanuel School hosted a delegation from Haiti’s Office for the Protection of Citizens. The three visitors held a training for high school students on the rights and duties of citizens, spoke about violence in society, and shared about the role OPC plays in Haiti.

This connection was also made through a connection of Andris’, this time one of his former professors in law school who now serves as “Protector of the Citizen” in Haiti, head of that agency.

“I’m interested in bringing lots of people with good positions in our society who can motivate the kids and serve as role models,” Andris said. Next he hopes to host a well-known geological engineer who will talk about earthquakes and reducing the risk of seismic damage in Haiti.