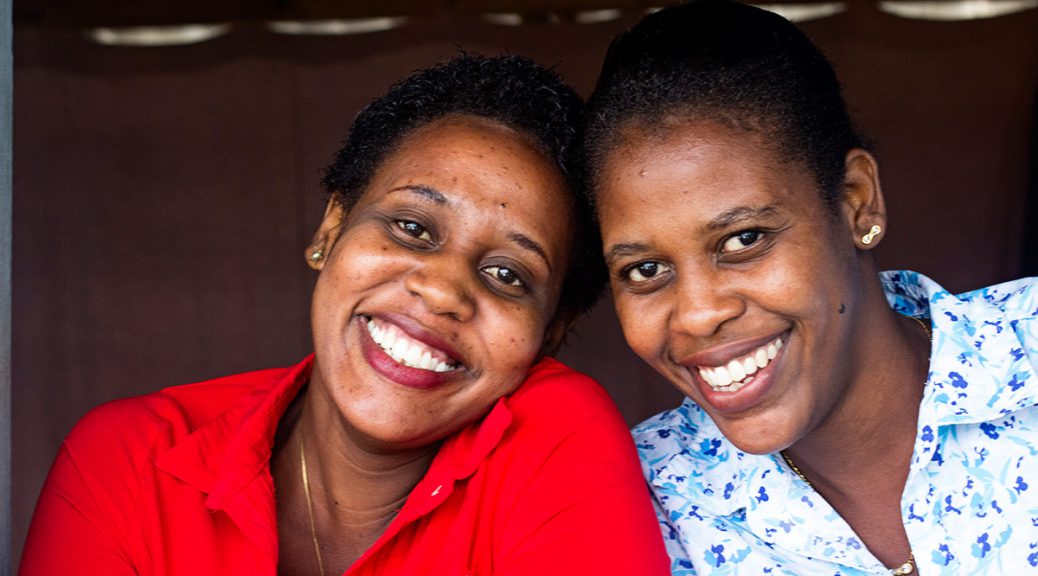 At 4:53 pm on Tuesday, January 12, 2010, a 7.0 magnitude earthquake struck the country of Haiti, killing a staggering amount of people and leaving a permanent mark on the history of this beautiful country.

For the millions of people who survived that day, there are countless stories of joy and tragedy, narrow escapes and painful losses. Four children now living at the Lighthouse lost their mom that day, while several students currently attending Grace Emmanuel School lost their dad. There isn’t a family in Haiti that wasn’t affected that January afternoon.

To honor these memories that still seem like yesterday to so many, we share one family’s story today—the Saint Fleur sisters, who have worked at Grace Emmanuel School for nearly a decade.

A bulldozer or the end of the world

At 4:53 pm on January 12, 2010, Maudeline Saint Fleur was a new mom on maternity leave from Grace Emmanuel School, resting at home with her 1-month-old daughter, Stacy.

Her first thought when the earthquake struck was that a bulldozer was right outside her house—until she quickly remembered there was no way a bulldozer could fit on the narrow streets in her neighborhood.

She felt the shaking, saw something fall, and began to think, This is the end of the world.

“I awaited the judgment,” she says seriously.

Terrified and shaken, she couldn’t move to get out of the house. She sat squeezing Stacy as tightly as she could.

When the rumbling stopped, Maudeline looked outside to see a completely different landscape than what had surrounded her mere seconds earlier. Security walls had collapsed. The house next door had fallen.

An earthquake, she finally realized.

A million thoughts rushed through her head: Did my husband die? My parents? My sisters and brothers?

There was no cell phone service, but she soon found her husband outside her house and then went on foot to find her parents.

The sun set at 5:31 pm, less than 40 minutes after the earthquake. The streets were filled with dust, darkness, and people searching for loved ones.

When she finally reached her parents’ house, she saw her dad, in shock, and her sister, Marie-Lyne.

“My dad kept saying my mom had died, but it wasn’t true,” Maudeline remembers.

Marie-Lyne told her a wall had fallen on their mom and youngest sister. Her dad had frantically removed the blocks to free them. They had gone to a hospital.

To Maudeline’s overwhelming relief, everyone in her immediate family had survived—but only, they would soon discover, thanks to a gunshot.

An absent teacher and a mother’s advice

At 4:53 pm on that Tuesday afternoon, Maudeline’s sister Marie-Lyne should have been sitting in nursing school in downtown Port-Au-Prince. It had been her routine all year—teach kindergarten at Grace Emmanuel School from 8 am until noon, then take a tap-tap into the city to attend nursing school until 6 pm.

But that afternoon, her teacher never showed up for class.

After 30 minutes, Marie-Lyne and her classmates decided they had waited long enough and left the school. A couple of her friends invited her to accompany them to visit another one of their friends who was sick. She considered going with them, as she would still be home before she should have been done with school, but remembered how much her mom discouraged her from going anywhere outside her normal route.

She heeded her mother’s advice, said good-bye to her friends, and headed home.

She arrived home just before the earthquake hit.

Her nursing school collapsed in the earthquake. The students inside did not survive.

She later learned her teacher had been absent that day because—of all things—he had been shot in the arm. A gunshot that saved his life and a classroom full of future nurses.

After the earthquake, the sisters recall sleeping outside for a month because of the frequent aftershocks. Food and water were difficult to find.

“If you heard one relative had died, you consoled yourself by saying, ‘I still have this other relative who lives’,” Maudeline said. Their family lost two cousins that day.

It was a time in their lives they will never forget.

“I still pray, Thank you, God!” Maudeline says. “So many people lost their lives, their legs, arms. But we were okay.”