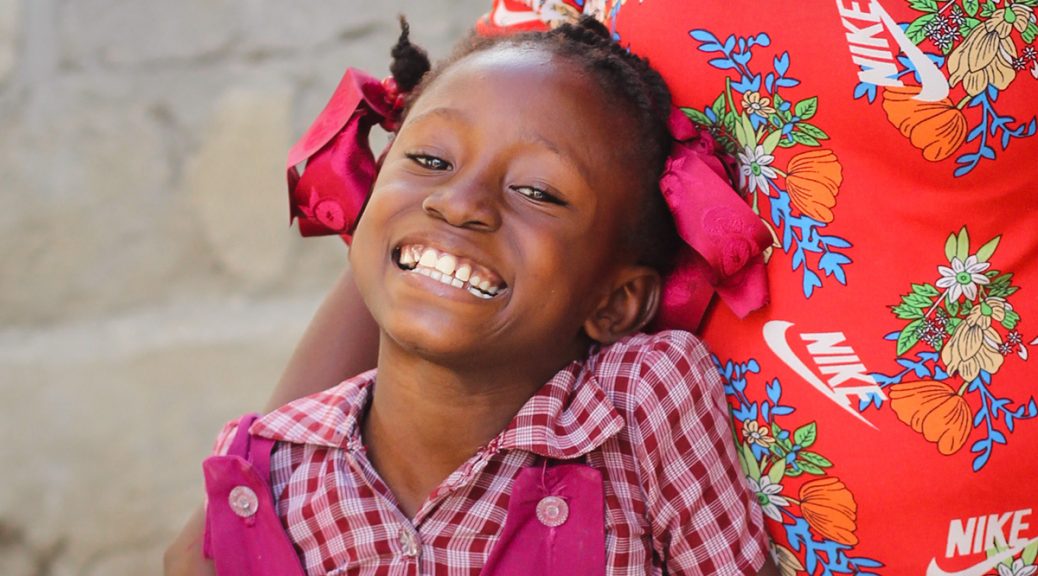 She remained unresponsive for weeks, lying lifeless in a hospital in Port au Prince. Doctors eventually diagnosed her with meningitis, an infection in her brain. She needed a miracle to survive.

After several weeks in the hospital, the miracle came. Ruth Shama—who goes by just Shama—recovered in time to start 2nd kindergarten at Grace Emmanuel School.

About six months later, however, her mom noticed Shama was struggling to walk on her right foot. She developed a limp. Then it became difficult for her to hold a pencil. She was referred to a physical therapist, but eventually her symptoms mostly disappeared, and she stopped seeing the doctor.

Two years later, in February 2018, Shama suffered two seizures at school within one week. After the seizures, Shama lost control of her right foot and right arm and began having difficulties with her speech.

She began seeing a physical therapist again, but her mobility and language were never recovered. It seemed that her brain had suffered more damage from the lasting effects of the meningitis.

Living with a new normal

It has now been 6 years since Ruth Shama walked out of the hospital. She has continued on with her life, though not in the same way as before. She is alive—and that is what matters most.

Now a 5th grader, Shama has dreams of becoming a doctor and no plans to surrender to her disabilities.

“Ruth Shama is very determined to participate in everything the class is doing,” said Jonas, her teacher. “She always knows her lessons. She is one of the best students in my class.”

“In the neighborhood where I live, there are always children who tease me,” Shama shared. “Even in school, they sometimes tease me. I cry often, but after that I just tell them ‘Maladi pa tonbe sou pyebwa, se sou moun.’”

Trees don’t get sick, people do. It’s a Haitian proverb that essentially means don’t be too proud, because we’re all human and this could happen to any of us.

“Instead,” Shama tells the bullies, “you should be thanking God that you’re healthy.”

Though her mom is glad that Ruth Shama can defend herself, hearing her daughter talk about this struggle brings tears to her eyes.

She says she used to cry often, especially at the beginning of Shama’s lasting disabilities. It still breaks her heart to look at children the same age as Shama in good health while her daughter struggles to walk.

Yet she will never forget seeing her baby girl in a coma, and reminds herself that it could be worse. Thanks to God, Shama is still with her today.

Still praying for a miracle

Even though she knows her family loves and accepts her just the way she is, Shama has great faith in God. She believes that God can heal her, and she looks forward to testifying to that healing. She said she would even start a group to sing for God.

Marie-Lyne, Grace Emmanuel School’s nurse who has been part of Ruth Shama’s story since her initial illness, holds on to hope as well.

“Ruth Shama’s palsy may seem untreatable, but that doesn’t stop us from staying positive about a potential miracle,” she said.

Will you join in praying for this sweet student at Grace Emmanuel School? Pray for her to keep her strong faith in God, to stay determined in the face of difficulties, and for other children to see her for the precious child of God that she is.

And, of course, pray for her healing.