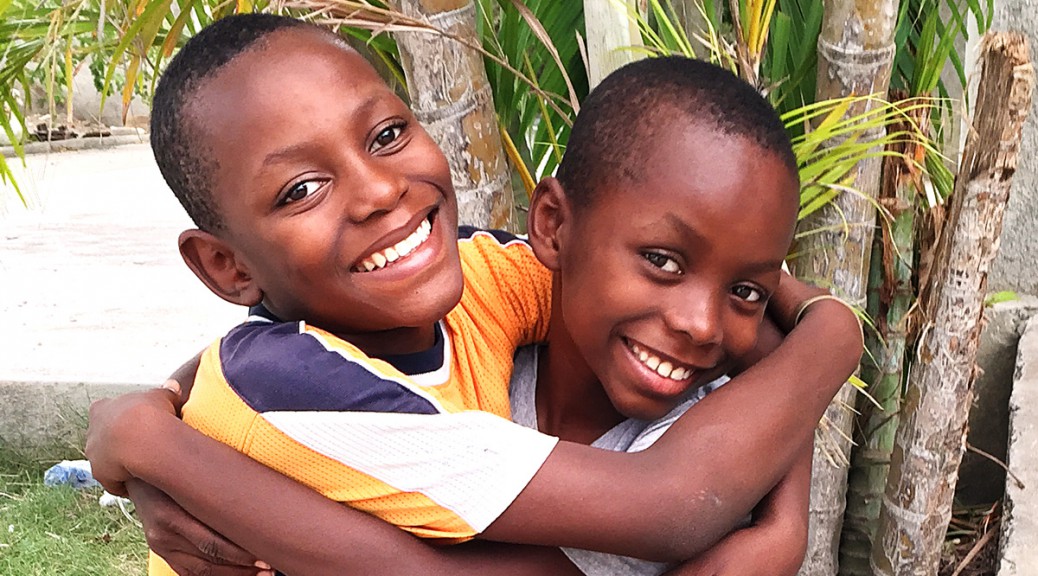 Although the details of their first chapter are still unknown, I imagine it begins like this.

It is April 2006, and Peterson’s mother has just given birth to another precious son, his younger brother by two years.

His mother, a good woman, loves him and his baby brother, whom she names Israel. He watches her with him and realizes this is someone he should love, too. He is only a toddler but he feels and knows the love of family.

But what Peterson doesn’t know is that his mother has nothing. No earthly possessions, no money to her name. And while she loves him, her heart begins to fill with doubt. She sees herself as inadequate, worthless because she doesn’t know how she will provide for her sons. She is overcome with sadness and even guilt, as she prepares to make a decision that will change the course of all their lives.

Then one afternoon, she gathers Peterson and Israel into her arms, climbs into the back of a taptap, and makes her way toward the city. She will leave the boys outside Cabaret. She carries them and their few belongings to the gate of an orphanage.

The door opens, and she knows this is goodbye. She leaves them in the arms of a stranger who will look after them from this day forward. Tears fill her tired eyes. She walks away, full of shame and heartache, hoping and praying this place will provide a better future for her children than she can.

Peterson and Israel—who soon will be nicknamed Johnny—spend the first few years of their life in this orphanage. They are two of about 100 children, incredibly malnourished and neglected.

In 2008, I meet them at the orphanage for the first time on a trip with JiHM. Johnny has only a small shirt covering his tiny body, his nose running. Peterson has on a pair of pants and a shirt with Disney princesses printed on the front. They are covered in dust.

But their stories do not end in that dust.

Over 6 years have passed since Peterson and Johnny moved from this orphanage to the Lighthouse. By the grace of God, their lives were spared because they were not forgotten. They are no longer the toddlers who were abandoned by the world, but young boys who are developing beautifully unique personalities, full of passion and dreams for their future.

Peterson’s spirit is incredibly sweet and gentle. He has a servant’s heart in almost all that he does. He is patient and kind, and always willing to put others before himself.

Something that never ceases to amaze and humble me is the loyalty he has to his friendship with Gervens. Gervens, born blind, arrived at the Lighthouse not long after Peterson. They bonded immediately. Five years later, that bond has only strengthened. No matter what he is doing, Gervens is always followed closely by his companion. Peterson assists Gervens by serving his food, helping him find his sandals in the pile of shoes, holding his hand in unfamiliar territory, and simply remaining close to his side because he loves him.

I admire this quality in Peterson, and am thankful to witness such a beautiful relationship.

Johnny, two years younger, is quirky and goofy. He is most often found taking selfies or videos on any phone or camera he can get his hands on. One of my favorite things about him is his ability to make others laugh. Whether it’s what he says or the faces he makes, he is always trying to put a smile on someone else’s face. And he is usually quite successful.

Johnny possesses a soft, tender side. Although he is 9 years old, he still loves to be held and hugged, a quality I hope he doesn’t outgrow too quickly. And of course, he looks up to his older brother Peterson and is often close to his brother’s side. Sometimes, he even likes to match what he wearing. Their relationship is precious, because in Haiti, siblings can often be ripped apart from one another due to the lack of family unit. They are not only brothers, but friends who love another deeply.

I am confident the Lord has great plans for both of these boys. And although they are still young, I see so much promise in them. It is a privilege to know them, to love them, and to serve them. I am honored to share in a small part of their life, and I look forward to cheering them on as they chase their dreams.