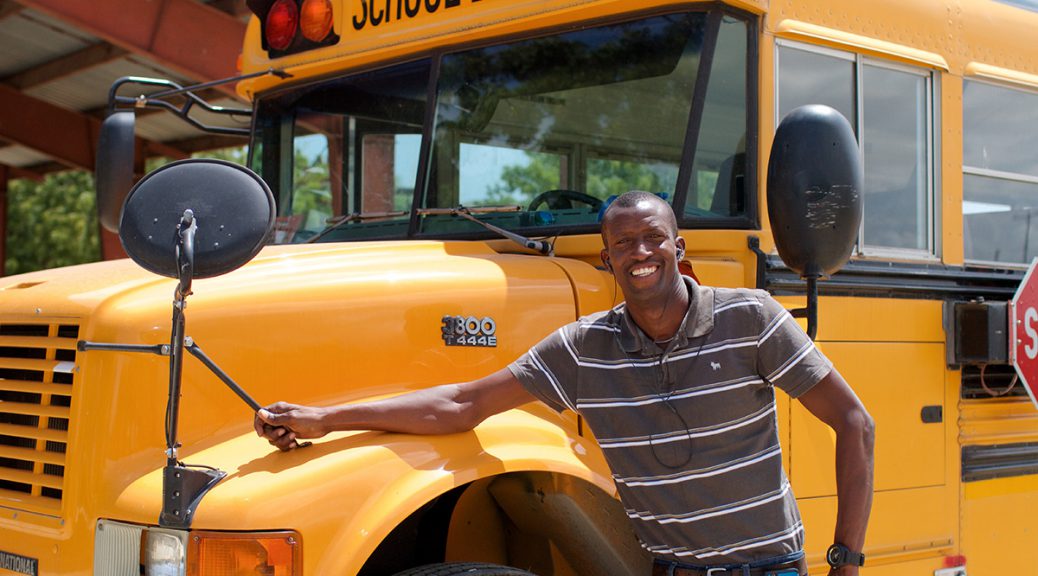 If you were searching for the person most excited for Grace Emmanuel School to kick off next month, you would need to look no further than GES Bus Driver Fleurandieu Anylisse—or Pele, as everyone calls him.

Pele enthusiastically loves his job driving the Grace Emmanuel School bus. He loves the kids, he loves the mission, and he loves the new bus that arrived in June. “It is very comfortable,” he says. “Everyone loves it.”

Following in his father’s footsteps, Pele has been driving since he was 18, when he went to driving school to get a special license. Through his career, he has driven for a few other ministries, cement companies, and schools. But driving for Grace Emmanuel School has been his favorite work.

“I feel great when I’m in this yard,” he says, looking around the mission with a smile stretched across his face. “Of all the places in the world, this is the place I hold in my heart.”

Pele believes that working with children is a special call God placed on his life after literally bringing him back from the dead several years ago. He had been standing on the second floor of a building when he was electrocuted by a power surge. He remembers feeling a lot of pain and then he was gone.

“I was unconscious for an hour. They didn’t even call the ambulance because they knew I was dead.”

While he was unconscious, Pele had a vision of being in the middle of crowds of children. Then someone started crying and he came to.

“If God wasn’t in my life, I would be dead,” Pele says with conviction, as he shows off the spider-like scar on his leg from the bolt of electricity.

Pele’s faith has helped him get through difficult times in his life. His face falls as he describes what he calls the worst moment of his life—being laid off from JiHM in 2015 due to restructuring.

But in 2016, he received a phone call asking him to be the full-time bus driver for Grace Emmanuel School.

“That was the glory moment!” he says joyfully, switching to English to emphasize his point. “I’ll never forget that moment.”

Bringing 375 students safely to and from school each day is not for the faint of heart, but Pele manages it with a smile.

“Kids are always making trouble,” he said. “But I can handle it.”

Though he is well-loved by all the students, there is one student most dear to his heart—a sixth grader named Felisson whom Pele has raised since he a was a baby. His parents, Pele’s close friends, passed away when Felisson was only two months old.

Looking toward his future, Pele has plans to get married to his long-time girlfriend in the next couple of years, but his greatest aspiration?

“I want to work here all of my life,” Pele says. “When I’m an old man, I still want to be here working. I don’t think anyone likes it here more than me.”

Grace Emmanuel School begins a new year on September 3. Please keep Pele in your prayers as he navigates the chaotic highway to bring GES students safely to and from school each day.