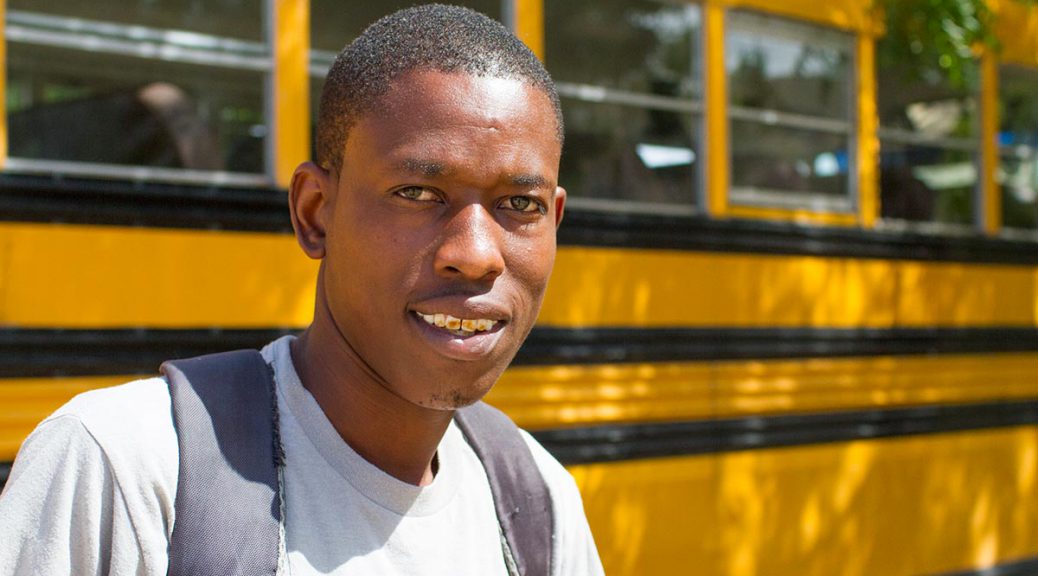 When Grace Emmanuel School opened on Monday, one high school student returned to the classroom for the first time in nearly a year and a half. Francico Fleurimond, 12th grader, had overcome one more obstacle to completing high school.

Francico’s story began in a fatherless home. Born in 1991 to parents who had met at a wedding and never really been together, Francico grew up with his mom, grandma, and two half-siblings. After an illness took his mother’s life when he was 9 years old, Francico spent the rest of his childhood with his grandma.

These were not easy years—he recalls going days without eating, and sleeping on a dirt floor. During the months when he would receive help from people at his church, Francico was able to pay to attend public school. When he couldn’t pay, he sat at home or tried to find work. For that reason, it took him until age 18 to finish 6th grade.

In the fall of 2010, an opportunity opened up for him to begin 7th grade at Grace Emmanuel School, meaning he would no longer have to worry about finding money to pay tuition each month. He would be able to finish high school.

But another unforeseen obstacle remained.

In 2016, now in 12th grade, Francico went home from school with a high fever. After the fever was gone, his body never seemed to recover. He lost weight, was tired all the time, and sick to his stomach. It took almost a year for doctors to give him an unexpected diagnosis—diabetes.

Once he knew more about his illness, Francico was able to begin to manage it—not an easy feat anywhere, but especially not in Haiti. It took him another several months to feel like himself again. By then, he had missed over a year of school.

This summer, Francico sought out the school administration to ask for a spot back at the school. He was accepted gladly, and his former sponsor in Indiana was quick to partner with him again.

As he nears his 27th birthday, it is hard for Francico to think about having to retake 12th grade, knowing he won’t graduate until he finishes 13th grade in 2020 at the age of 28. But he perseveres, because his goals require completing high school.

“Finishing school is a way you can help yourself. Haitian society asks you to be successful in life—to finish classical studies and go to university,” he says. “That gives you access to employment.”

Francico wants to study administrative science, computer science, and theology. “I want to know more about God so I can teach people about God,” he says, “because God is great in my life.”

Francico sees the challenges he has overcome in his life—living in a difficult country without family (his grandma died in 2013) and now with diabetes—as proof of God’s working in his life.

“I wouldn’t be here without His grace,” he says. “Tell everyone my story.”