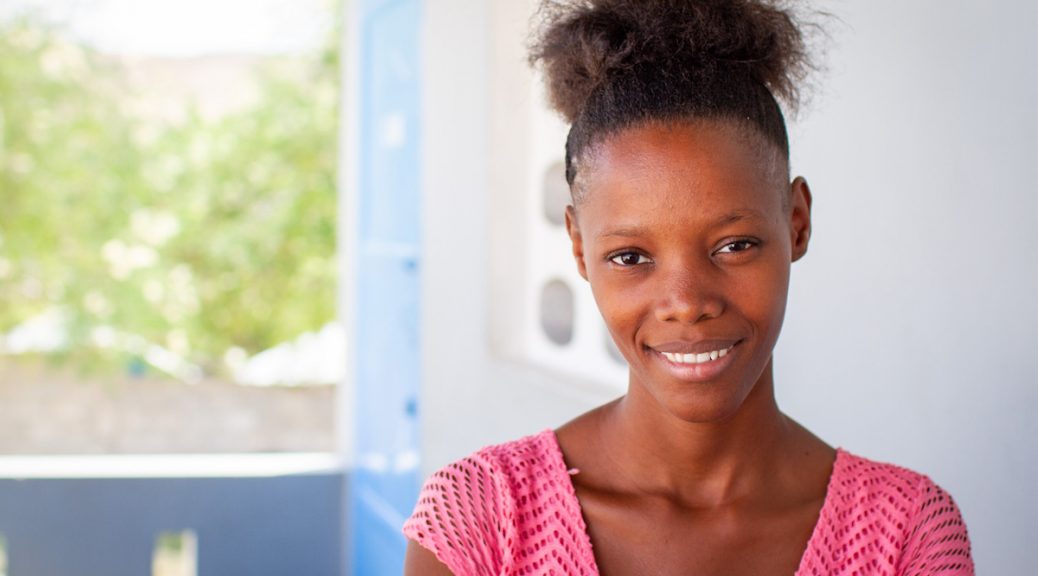 This spring, Esther Lamour, 22, was chosen as one of two recipients from Grace Emmanuel School’s Class of 2020 to receive a college scholarship from JiHM. She is the first female to receive the scholarship and plans to begin studying nursing this fall.

“Ah, for me, it is a blessing!” Esther responded with a smile when asked how it felt to learn she was one of the recipients. “I was praying that the school could help me in some way, but when I heard God led them to give me the scholarship, I was so happy. And it is my mom’s joy.”

Her mom’s joy and the Lord’s leading in her life are two themes that intertwined regularly as Esther sat down with us to share a little bit of her story. We hope you’ll take a few minutes to get to know this courageous young lady.

Childhood—”God took care of us”

Immediately after she was born in Petit-Goave, Haiti, Esther was left to be raised by her grandma while her mom traveled to look for work. She never had a relationship with her dad.

“When I was 6, my mom came for me and brought me to Source Matelas. Since then, I’ve been raised here by my mom. It wasn’t always easy, but God took care of us.”

Esther’s mom has been a champion of her education her entire life, telling Esther often that she must “view education with the same importance as the two eyes in your head.”

Through her mom’s perseverance, Esther was able to attend different public schools fairly consistently through 6th grade—the level when many schools in Haiti end instruction because of the increased expenses of the higher grade levels.

High School—”My mom stood by me”

Much to her mom’s relief, a spot opened up for Esther to start 7th grade at Grace Emmanuel School in the fall of 2012.

“The support I found at Grace Emmanuel School surprised me the most,” Esther remembers. “At GES, I found a family, whether with my friends, my teachers, or my sponsor. I felt well surrounded.”

She was also surprised that a free bus came to get her and bring her home everyday and that she received a daily lunch. “When I was at school in Lilavois, I went to school on foot and without food.”

All of these things were important to her and her mom, but she says the biggest difference with Grace Emmanuel School was the quality of education she received.

That increased quality often equated to difficulty for Esther. She failed her first year at GES, but persevered for the first of many times, thanks to her mom.

“My mom is my best friend and my counselor,” she said. “She always encourages me in life and in my studies. When I was in 11th grade, I wanted to quit school because things felt too difficult for me, but my mom stood by me. She helped me. I love my mom a lot.”

Looking ahead to the anticipated challenges of college, Esther says it will be her mom who will keep her going. “She always says she would like me to achieve everything she never could.”

Encounter with Jesus—”Jesus called me to come to Him”

Despite all the love her mom poured into Esther through the years, the poverty she’s experienced has included times of hunger and homelessness and posed difficult challenges for her to overcome.

“At one point, I became involved with boys so I could help myself in some ways. But I realized that I was doing wrong. Jesus called me to come to Him and I accepted.” She says her meeting with Jesus has had the most profound impact on her life.

Esther chose to be baptized soon after becoming a Christian, and her faith has impacted her every day since.

“I still encounter many problems, but the joy I have in God helps me in everything that comes my way,” she said. Esther’s favorite Bible verse is Acts 2:14, “Salvation is found in no one else, for there is no other name under heaven given to mankind by which we must be saved.”

Blessed to be a blessing

Through her faith and her education, Esther’s biggest hope in life is to help others. That motivates her decision to study nursing in college, and she hopes someday she will be able to help many young girls who find themselves making the same choices that she once made.

Esther wrote on her scholarship application, “After I earn my degree, I will serve children, the elderly, the disabled and pregnant women. In the community where I live there are many people who have died from lack of health care. Life cannot go on like this. I must act.”

We are so proud of Esther and excited to partner with her through the next chapter of her education. We know her ability to work hard, her humility, and her gratitude to her Savior will carry her far in her future.

Esther wanted to close with this word of thanks to the sponsor, Kimberly, who provided for her education throughout her 8 years at Grace Emmanuel School:

If you would like to be part of sending Esther to college, find out how to support the GES scholarship fund.