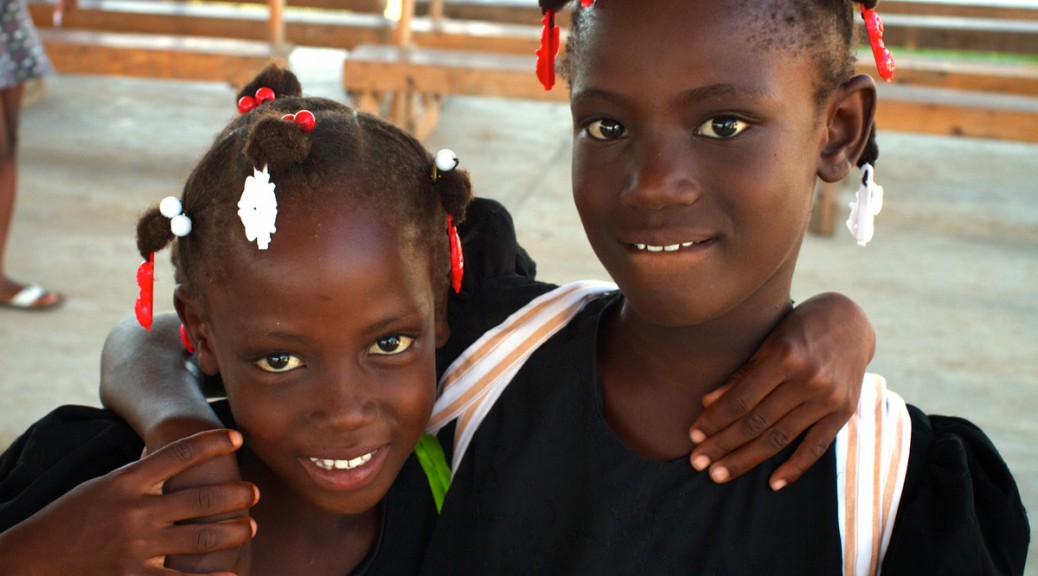 We have not lived in Haiti long in 2012 before we meet Rosena and Roseberline, two sisters at Grace Emmanuel School. We learn that their father had just passed away, struck while selling drinks at a speed bump on the national highway. We learn their mother, with another daughter at home, was newly pregnant when the tragedy happened.

Rosena, a second grader, and Roseberline, a first grader, wear black to school everyday that fall. Rosena is more reserved than her sister, but they both begin to reach out for extra long hugs every morning at school. Sometimes Rosena talks about her dad, telling me matter-of-factly the details of how his body was broken by a semi that just didn’t slow down. She makes me memorize her father’s name so that together we won’t forget him. My heart breaks for this sweet child as she processes her grief.

Later that school year, tragedy strikes her family again. Roseberline is crossing the street on Easter Sunday to fill up a bucket with water. She is struck by a van and dies immediately.

Within nine months, Rosena has lost her father and sister.

I can smell the grief in her small, tarp-enclosed home when the entire school visits the day after Roseberline’s death to share in this family’s sorrow yet again. The funeral is held on Friday and the wailing of her aunts and grandmother is unbearable. A somber funeral march follows Roseberline’s casket to the family grave where her young body is placed with her father’s.

A few weeks later, Rosena returns to school. As one might expect, she struggles. She fails second grade in 2013, and again in 2014, right before her 11th birthday.

Haitian school policy is to dismiss students who fail the same grade twice in a row. Rosena needs another chance.

Haitian school policy is to dismiss students who fail the same grade twice in a row. Rosena needs another chance.

She returns to second grade this past September, but she doesn’t come to school alone.

This year with the new school buildings and more sponsors, JiHM is able to hire Rosena’s mom to be an aide in a kindergarten classroom and help clean the school. She comes to school and leaves every day with Rosena and her 5-year-old daughter Fetchina, who is also new at school this year. Her mom’s presence makes a visible difference in Rosena’s behavior.

Rosena has a sponsor in Indiana who thinks about her and prays for her often, writing to encourage her and even coming to Haiti to visit her home this fall. They get to spend a day at the beach together.

Rosena also joins Power Girls, a program for pre-teen and teenage girls through Victory Bible Church. She meets with Iselande and Stephanie every Saturday to learn about Jesus—how He died and rose to conquer death, and how to live for Him. In December, she is one of two Power Girls chosen for a special award for excellent behavior, kindness, and wisdom.

At the end of last month, nearly two years to the day since losing Roseberline, I am visiting Haiti and catch a glimpse of Rosena as church is starting. She gives me a shy smile before walking over for a hug. I ask her how she is doing and she pulls me close so she can whisper in my ear:

“Kristi, I’ve made two 8s and a 7 in school this year!” She beams. Rosena is going to pass second grade this year.

I hug her so tightly I think she might break. I delight in this moment, feeling the tears brim over, thanking God for the ways He is making Rosena’s story new, and the many ways JiHM gets to be part of it.