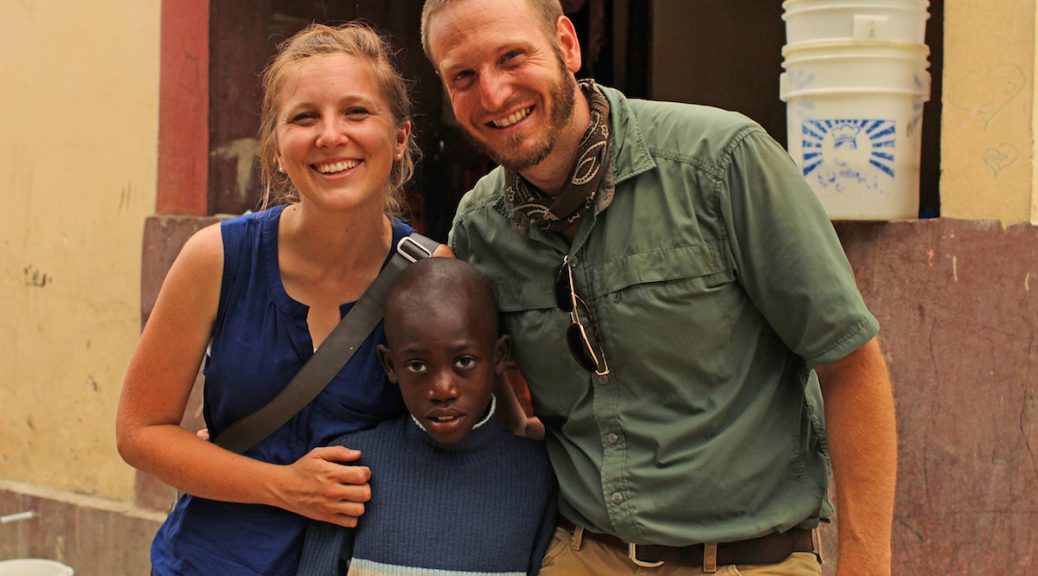 My husband, Nathan, and I have sponsored Mike at Grace Emmanuel School since 2017, when he was finally able to enroll at nearly 12 years old. His story continually breaks our hearts and motivates us to serve. We are glad to do the Haitian Hustle for him this August.

We meet Mike in the summer of 2013. He is the quietest of a handful of kids who have started hanging out at JiHM’s property. Their families have just been given plots of land directly across from the mission, on the barren hills referred to as “New Jerusalem.” The boys come often to fill up buckets of water from the mission’s well, as well as seek some shade during the brutal heat of a Haitian summer spent on a desolate hillside.

As fall approaches, we try to find spots at Grace Emmanuel School for these New Jerusalem kids, but they are older and many haven’t even started kindergarten. We don’t have a means to integrate them, knowing from past experience that putting older boys in a kindergarten classroom with 5-year-olds does not have positive results. Eventually we lose touch with the kids as they are sent on to new locations with other family.

Two years later, in August 2015, I am translating for a sponsor visit to Abigaille’s house, deep into an area known as Teleko. As we sit on the family’s front porch, I notice a young boy quietly observing the interactions.

He looks like one of the boys from New Jerusalem, but that doesn’t make sense. We are several miles removed from that place, and as far as I know, this family has no connection to him.

I begin to ask Abigaille’s mom questions about him, and discover it is Mike. He is her nephew. He and his grandpa, her father, had moved in with them one year earlier, following his grandma’s death. Mike had been raised by his grandparents after his dad abandoned him and his mom died several years ago.

I tell Mike I remember him and ask him some questions. He says he is 10 years old. When I ask what grade he is in, he just shakes his head shyly. His aunt explains that Mike has never had the chance to go to school.

Mike lives in a house filled with cousins who leave for school every day while he stays home and does all the chores. It is not an uncommon story in Haiti, but always catches me off guard.

I don’t believe this meeting has been by chance. Later that afternoon I brainstorm with some of the school’s staff. If we found a private tutor for him, could he catch up to his grade level? They tell me yes, though it will be expensive.

Quickly God provides the funds, the tutor and the plan. Jean, a teacher who has just lost his job because his school closed, will take a motorcycle taxi to Mike’s house three times a week to spend the morning teaching him everything he would have learned in kindergarten. We will check his progress the following summer to see if he is ready for integration into school.

Jean soon discovers that Mike is smart. We receive frequent text updates from him, overflowing with pride over Mike’s progress. Soon this 10-year-old boy is writing the alphabet, spelling his name for the first time, and doing simple math problems.

“He always had patience to try things multiple times without discouragement until they were right,” Jean recalls. “One day I had him at the chalkboard to write his name. There was one letter he would always mess up. When he had finally done it right, he said, ‘Ooh, God thank you! I won’t have to sign my name with an X!’”

After several months of tutoring, Mike takes the same exams that the first graders are taking at Grace Emmanuel School, and passes easily.

There is not a spot available when registration comes around the next summer. Jean agrees to tutor him for a second year, and finally a spot opens up for Mike in 3rd grade for the 2017-2018 school year.

It is pure joy to watch Mike register for school for the first time in the summer of 2017, smiling at age 12 for his first ever school photo.

Mike has passed every quarter since, usually scoring right in the middle of the class. This fall, Mike will begin 5th grade. He is fully integrated and seen as just one of the other students.

Yet the chance to attend school doesn’t erase the trauma he has experienced in his young life, or take away the debilitating poverty that he still goes home to every evening. He rarely eats breakfast, and he and his elderly grandpa rely on his aunt to provide food for them. He is far from carefree, recently expressing fear over playing outside in his neighborhood after his younger brother disappeared several years ago during the night, never to be seen again.

Why we Hustle for Mike

Though my husband and I have the awesome privilege of sponsoring his education, we know $35 each month doesn’t cover the full cost of all the support Mike will need to thrive. Additional programs at Grace Emmanuel School, like our nurse’s office, school counselor, and weekend food assistance, are necessary, but not covered by sponsorship fees.

That is where the Haitian Hustle comes in, and why we’re Hustling for Mike. All the profits of the Hustle go toward educational support costs not covered by sponsorships at Grace Emmanuel School and the Lighthouse Children’s Home.

We have seen first-hand what a difference this support is making in Mike’s life, and want to be part of sharing these burdens for this sweet 5th grader, and nearly 400 others like him. Taking part in a 5K and inviting others to do the same is a simple way to do just that.

“My command is this: Love each other as I have loved you. Greater love has no one than this: to lay down one’s life for one’s friends.” John 15:12-13

Will you join us, and register for the Haitian Hustle today?