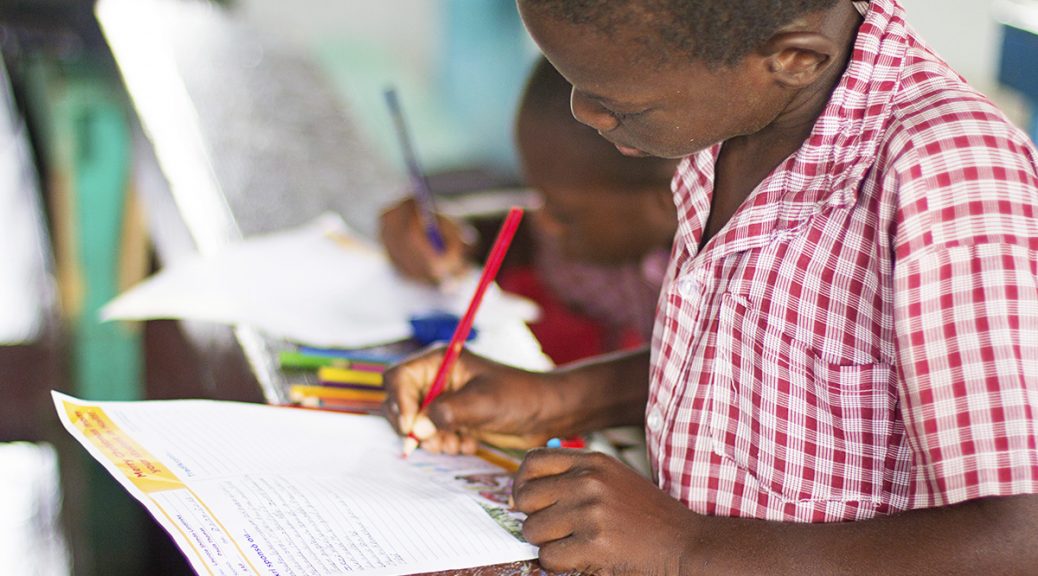 A confession: I have been guilty of going years at a time without writing to the child my husband and I sponsor in Colombia.

I want to assure you I’ve been capable of writing letters since elementary school. I was well supplied with templates to write on from the organization. And I definitely had 10 minutes of free time at some point during those years to write a simple hello.

So if it wasn’t a lack of ability, resources, or time, what kept me from picking up my pen?

I didn’t believe in the impact a letter could have. I mistakenly assumed that the money I sent in each month was the most important part of my sponsorship, and letters were mostly just an exercise in accountability for the organization handling the money.

Then for two years, I had the privilege of being physically present in Haiti with the hundreds of students impacted by your sponsorships. I got to see them learning in class, meet their families, and share meals with them. I saw their vast array of personalities (and definitely had a few favorites). I shared their tears when a fellow classmate’s life was cut short by an accident, and celebrated with them when they passed difficult government exams.

As word got out that I managed the sponsorship program, I soon became barraged with questions from the kids. “Do you have a letter for me? Do you know Mike, my sponsor? Brenda, my sponsor? When will my sponsor come to visit me? Can you take my picture for my sponsor?”

These “sponsored children” came to life before me, so much more real than a photo in the mailbox each year. It began to hurt me—and convict me—when I had to tell the same kids over and over that no letter had come.

In their book When Helping Hurts, Steve Corbett and Brian Fikkert talk about how the poor don’t often define their poverty as a lack of material things, but more as a feeling of powerlessness and an inability to make themselves heard. One person described it as voicelessness.

By not responding to any of my sponsored child’s letters for years at a time, I had played a part in furthering her sense of poverty. When I put myself in her shoes, and imagined writing to someone consistently with no response, I felt ignored. Voiceless.

As a Christ-follower, I am called to spend myself on behalf of the poor (Isaiah 58:10), to lay down my life for others (1 John 3:16). That definitely includes how I spend my money, but it also includes my time and energy, and my willingness to stop for 10 minutes in my day a few times each year to write a simple letter to a 16-year-old girl in Colombia.

I won’t be the most important person speaking into her life, but I can do my part to encourage and remind her that she is loved—by a sponsor she cannot see, and more importantly by the God she cannot see.

Will you help speak life into the students at Grace Emmanuel School? I often hear people say, “I just don’t know what to write!” Your letters don’t need to be more than a simple paragraph to greet them, ask how they are doing, and acknowledge that you received their letter or artwork. It truly is the thought that counts.

If you are already writing letters a couple of times each year, keep up the good work! If you haven’t written in awhile, write. If you’ve sponsored for years and never written, I’ve been in your shoes. Start today! Knowing that his/her voice was heard will only have a positive impact on the student you sponsor.