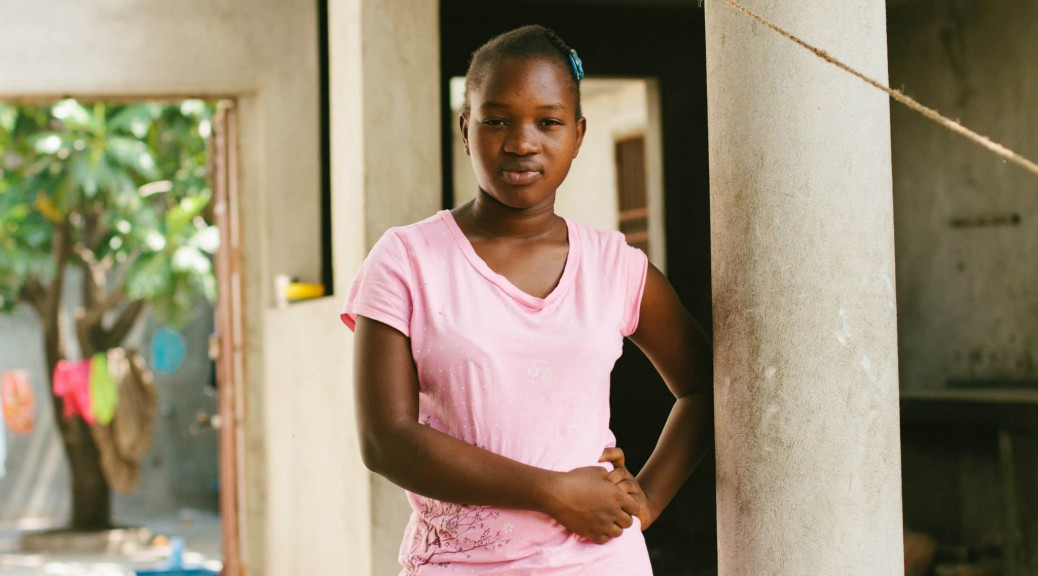 Her story begins in the town of Cabaret, just north of Haiti’s capital, Port au Prince. She spends the first several years of her life with her mother and her brother, who is just one year older. She attends Grace Emmanuel, a school that educates around 60 students when she starts kindergarten. Her mother works at the school as a cook. Daily she prepares the rice the students eat for lunch. Life is simple, just the three of them, and although her father is not around, Kimberly feels loved.

But on January 12, 2010, her world is abruptly altered. After school gets out at 1 pm, Kimberly heads home with her brother, just like every other afternoon. However, this afternoon, her mother will not be accompanying them home because she and her sister are going to visit their other sister in the hospital downtown. Their mother sees them off on the tap-tap and reminds them to behave themselves, and that she will see them later that evening. Kimberly waves goodbye as the tap-tap heads north to Cabaret.

It is the last time she will see her mom.

That Tuesday afternoon, at 4:53 pm, the country of Haiti experiences one of the most devastating earthquakes in history, killing hundreds of thousands of people, and displacing even more. In downtown Port au Prince, the hospital collapses on Kimberly’s mom.

Kimberly’s life abruptly changes. Her aunt also dies in the earthquake and there is no extended family to take her in. Soon after, she and Bony are welcomed into the Lighthouse with the few possessions they have, and thus begins a new chapter of life.

Almost exactly one year ago, I write this on my blog:

“I hold your hand and we walk down the street and you flash me that beautiful smile. And I’m so grateful for this moment, a moment of peace after weeks of resistance you’ve shown me. You’re thirteen years old, but that doesn’t stop you from taking my hand in yours, like you’re proud to be standing by my side, almost like you’re saying, I accept you. I study your face; the same one I first laid eyes upon years ago, when you still had a mom. You tell me about her. You tell me that she used to work at the school you attended. You tell me she was a good mom.

“But her life was taken too soon…You could never have been prepared for that. No one could have told you. You had just turned nine years old a month before it happened. And you returned home from school that day waiting for your mom to return, too. But she never did.

“Here you stand, over four years later, and you’re no longer that little girl, because today I am looking at a beautiful young woman. I look into your eyes and I’m overwhelmed; overwhelmed by your past and its brokenness; overwhelmed by all of the emotions that accompany a new teenager; overwhelmed by the journey that is to come; overwhelmed I have the privilege of loving you.

“You wrap your arms around me, something you haven’t done in a while. I wait for you to let go, but you don’t. Your arms grow tighter around my waist and you lean your head into me. And I am thanking Jesus in this moment; thanking Him that even in the darkness, there is still light; thanking Him you are starting to feel safe enough with me that you can test my patience; thanking Him for giving us both grace; thanking Him for you. Sometimes you frustrate me. Sometimes you hurt my feelings. But I know you do this because it’s what you know. It’s how you protect yourself from getting hurt again. I know you do this because you want to know I’ll still love you, that I’ll still stand by your side with open arms, waiting for you when you’re ready; because for you, to love is to be vulnerable.”

Just the other afternoon, I am walking down the street again with Kimberly. We are going to buy some cookies, chocolate cookies. She loves chocolate. She holds my hand in hers and looks up at me with a smile. She is so beautiful. I tell her this and her face softens. I think back to that time a year ago, when she had built those walls around her heart. I look at her now, and yes, there are still traces of those walls, but there is something different about her.

I study her face, and I am confident in this. Her confidence in herself is becoming more evident, and she no longer just hears those words that she is beautiful, but she is beginning to believe them. I can credit this change to none other than Jesus. Her past is filled with brokenness, and there is certainly brokenness to come. But by the grace of God, her heart has been captivated by the Truth.

I am thankful for her precious life, and ask that you would continue to pray for the journey ahead of her.