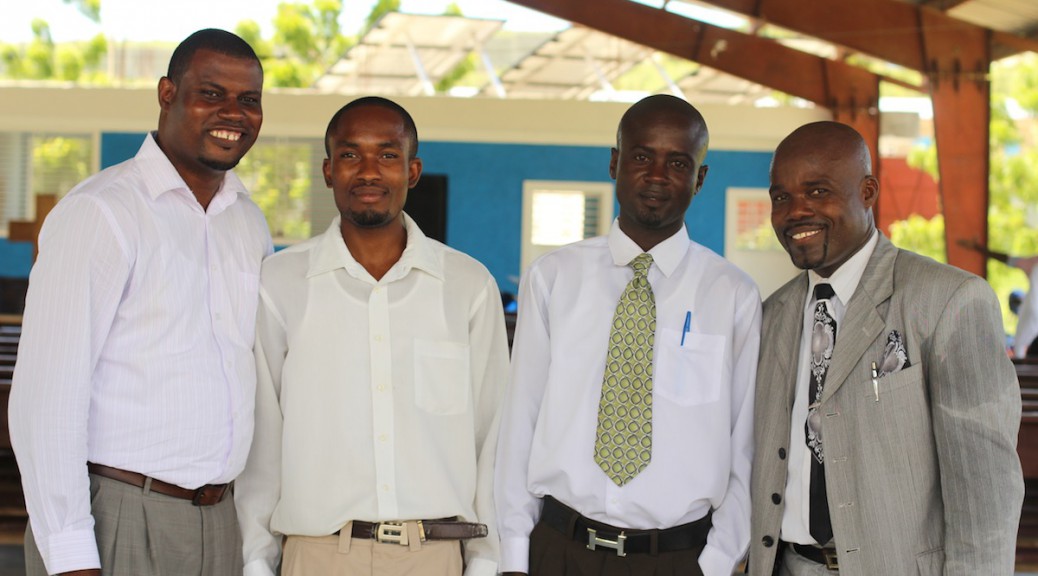 As many of you are aware, the last six months have been a time of renewal for Jesus in Haiti Ministries and rebuilding our leadership.

Knowing this is HIS ministry and that He is in complete control, the Board has been resting in these truths while working to keep the ministry operating smoothly. We have waited for the Lord to reveal the next move for JiHM.

Today, we are deeply encouraged to share with you the next move. JiHM has hired Carole Rood Roger (Roger) to serve as Director of Operations in Haiti. He begins today.

Roger, a former pastor of Victory Bible Church, will hit the ground running, working to shepherd the church and provide stable leadership for all of JiHM’s areas of ministry.

Roger returns to JiHM after spending five years with Samaritan’s Purse, where he served as Logistics Coordinator. While at Samaritan’s Purse, he worked on building relationships and filled many supervisory roles—both skills that will be crucial for his work with JiHM.

Though he enjoyed his work for Samaritan’s Purse, it was based over an hour from his home, and Roger, who grew up in Source Matelas, never stopped dreaming about returning to serve the people from his own village.

“I was always looking for a way to come back, and it finally happened. I wanted to come back to JiHM to serve God and serve people with passion,” he says.

While my own involvement with JiHM began after Roger had left to serve Samaritan’s Purse, for many of you, he is a familiar face and a dear friend. Roger is well-respected in the village as a man of integrity, and our staff has been elated at his return. I hope you’ll take the time to read our interview with Roger below and get a glimpse of his heart for God.

To make a gift to support Roger’s work with JiHM, please go to www.jesusinhaiti.org/give.

All glory be to GOD!

What motivates you in your work?

Where did you grow up?

Describe your time at Samaritan’s Purse.

In June 2010, after the earthquake, I heard about Samaritan’s Purse. They were in Haiti to rescue and bring physical support to the people and at the same time to preach the gospel. I said I would go and help them because it was a good opportunity to help people and also to invest them.

I was hired as a radio operator. Six months later I was promoted as a dispatcher. After one year I was the Logistics Coordinator. I built relationships between Samaritan’s Purse and the government, worked with importation and exportation, and also supervised the vehicle fleet and the drivers.

Where did you go to school?

I went to high school at Lycee Nationale de Cabaret. I attended the Fishers of Men Ministries Bible college and hold a Bachelor’s degree to be a pastor. I’ve also taken online courses.

Do you have any key mentors or people who deeply influenced who you are and what you believe?

I learned a lot from Brad Johnson (president of Mission of Hope) and the way he handled and dealt with people. He loved people and talked to people and I took that as an example of how I wanted to act.

Do you have any moments that changed your life?

In 1999 at Mission of Hope, I was chosen to be part of a ministry team. A man named Pastor Dan prayed for me and prophesied that I would be a man of God, among several other things—all of which have since happened. I will never forget that time.

If you could see one lasting change in Source Matelas, what would that be?

When and how did you become a Christian?

My grandfather was a voodoo priest. I grew up with voodoo and that’s what I did. As a kid, I loved it.

Then I started going to Mission of Hope and bible studies. Pastor Wilerme would teach about the gospel. I said to God, “I know you want me to come to you, but let me tell you this. The day that you give me all the knowledge about your word, whenever you do that, I am going to commit myself to you, I’m going to give you my life.” So day after day I studied the Bible to gain knowledge and I would sit and talk to people about it. So I told God, “You did your job, now let me do my job.”

At that time, there was a revival happening at a big church and a voodoo ceremony back at home. They needed me to go to dance as usual. That was what I used to do. My brother played the drums. But I felt led to go to the church, not the ceremony.

I went to the church and sat in the back on the bench. The pastor preached and called people to come to the front so he could pray for us. And I heard that little voice inside say “Go,” and I said “No way, I’m not going.”

After the third night, the voice again said “Go, you need to go.” And I got up and started walking up front and I heard people say as I walked by “Is that really happening? There is a voodoo ceremony over there—what is he doing here?” I acted like I didn’t hear them and I walked straight up and the pastor prayed over me that night. It was January 1, 1999. That was the best thing that ever happened to me.

Tell us about your family.

My wife’s name is Kerline and we have a little boy, Carlton. He is one year and two months. He really looks like his mother. My wife goes to medical school. She wants to be a doctor. My wife’s family is living with us. They had some trouble where they lived and I asked them to move with us so they would be safe. I have one brother in Source Matelas living with us. He works at Grace Emmanuel School. I am the oldest. I have three siblings that live in France with our father. I have no mother, no grandfather or grandmother.

How can Christians from the U.S. serve Haiti?

One of the things Haitians really want is people to really care about us. We really appreciate and love people who think about us. American people are really good at giving hope. Haitian people believe in hope. With one word of hope we can move mountains, we can do whatever. I think that is one of the ways the American people can help Haitians, because when they see Americans, they see hope.