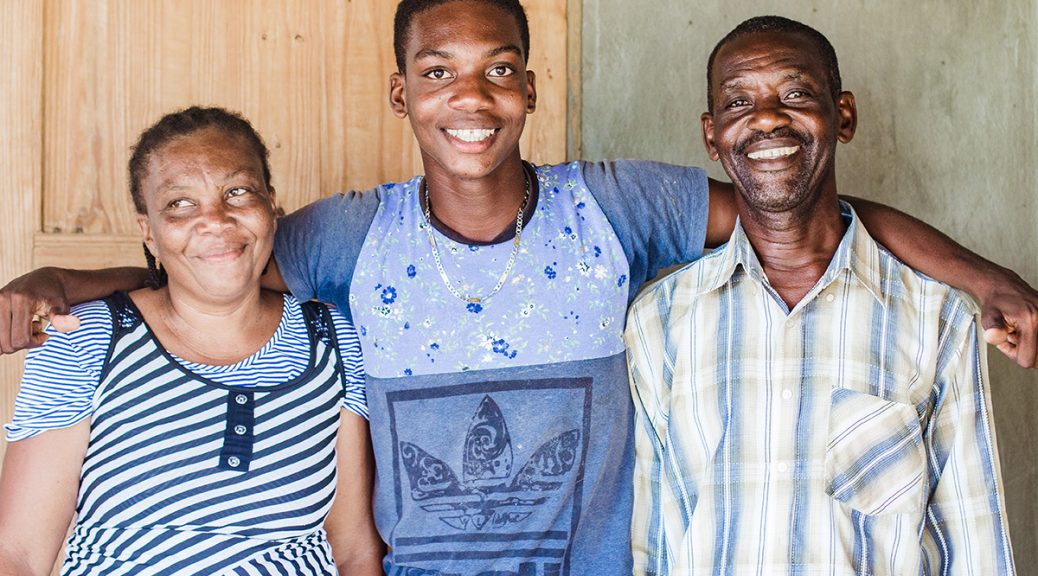 I have spent much of the last two years visiting the families of Grace Emmanuel School students, both in moments of intense difficulty and through casual visits to build relationships. Though each family is wonderfully unique in their experiences and history, I have found similar themes emerging from these families as to how they benefit from Grace Emmanuel School.

Through the following three stories, I wanted to give you a little insight into what your sponsorship means to your student.

As a reminder, nearly 1 in 5 children of primary school age in Haiti do not attend school, and less than 1 in 2 children attend secondary school. (Source: EMMUS VI, 2018) The majority of the population lives on less than 2 USD per day, and public schools are not free. Access to education is difficult, and access to quality education even more so. Education costs have continued to skyrocket with recent inflation.

Luc is 6 years old and in third kindergarten. Both he and his little sister Jockeberd (“Jojo”) were accepted into Grace Emmanuel School this year.

Luc’s parents have six children, ranging in age from 1 to 12. His father is a driver for a beverage company, and his mother stays home with the kids.

Last year, Luc attended a school where he was not allowed to complete the year because his parents could not finish paying the fees. The little that his father earns barely covers the daily expenses, so tuition is a great burden for them.

Due to his parents’ inability to pay for the school fees of four children, their priority had become the schooling of the two oldest children. Because of this, Luc and Jojo risked being unable to go to school this year.

“Being accepted at GES was my only chance to see my children going to school this year,” said their father. “I did not know how I was going to watch them at home this year while the other children went, or face the disappointment of telling their mother.”

Because of his parents’ great Christian faith, their children’s acceptance at GES was an answer to prayer and brought great relief and hope.

Jamesky is 17 and in 7th grade. His mother died when he was 7 years old and his father is not really present, so he and his big brother have been living with their aunt since their mother died.

Jamesky was born very premature, which caused some developmental complications, according to his doctor.

Many Haitian schools are not adapted for students with learning disabilities and unwilling to work at the rate of which a student may be capable. Sometimes students are insulted and feel left out for not meeting the school’s expectations.

At GES, the staff is patient and welcoming. They know that no matter where students are coming from, they must do their best to accommodate them.

“Jamesky is a kind and helpful boy,” his aunt told me. “He doesn’t wait for me to ask him for help. At school, I have never heard that he was insulted. He is treated well. No matter how hard learning at school it is for him, he deserves the best life possible.”

His aunt was concerned not only with paying school fees but even more with finding a school that understood the level at which Jamesky could work.

“I’m satisfied with the school,” she confirms with a smile as she looks at him. When Jamesky failed 3rd grade two years in a row, other schools would have been done with him. Grace Emmanuel School didn’t give up, and he passed the next year.

Jamesky is not the only student in this category. There are other students like him who feel accepted and understood at GES, benefiting from the chance to work at their own pace without judgment.

Pélandy is 17 years old and will graduate in 2022. He dreams of becoming a computer scientist. He lives with his parents who have been married for 30 years with 5 children—one of the few united families I have met. His family is very pious, and his parents have been Christians since adolescence.

In 2008, tropical storms ravaged Cabaret. His family lost everything in the flooding—their house, furniture, and even their life savings (equivalent to $2700) washed away. They lived for two years in a makeshift structure, and their children often fell ill with colds they caught with each rain.

“We spent a lot on their health,” said Jeannette, Pélandy’s mother. “We were at the clinic almost every week with one of the children.”

His parents hard work allowed them to finally provide a new home for the family. On the land where they lived before the flooding, his father built a small banana grove with which he supports the family throughout the year.

His parents dream that their children will go to university and that Pélandy will realize his dream of being a computer scientist. They save as much as they can for their children because they want a life for them different from their own.

“Pélandy helps me in the garden, and supports his mother in her work, which is selling goat meat at the market. It is he who kills the goat for her,” his dad told me. “He also plays drums in church, and helps the children in Sunday lessons. He will make a good computer scientist.”

Not having to worry about school fees is a relief for this family and a savings for the future of their children.

Each student has a unique story filled with strength, wisdom, and faith. Whether you are giving hope, making education accessible, or helping to create a future, I want you to know that your sponsorship is a blessing to your student and his/her family.