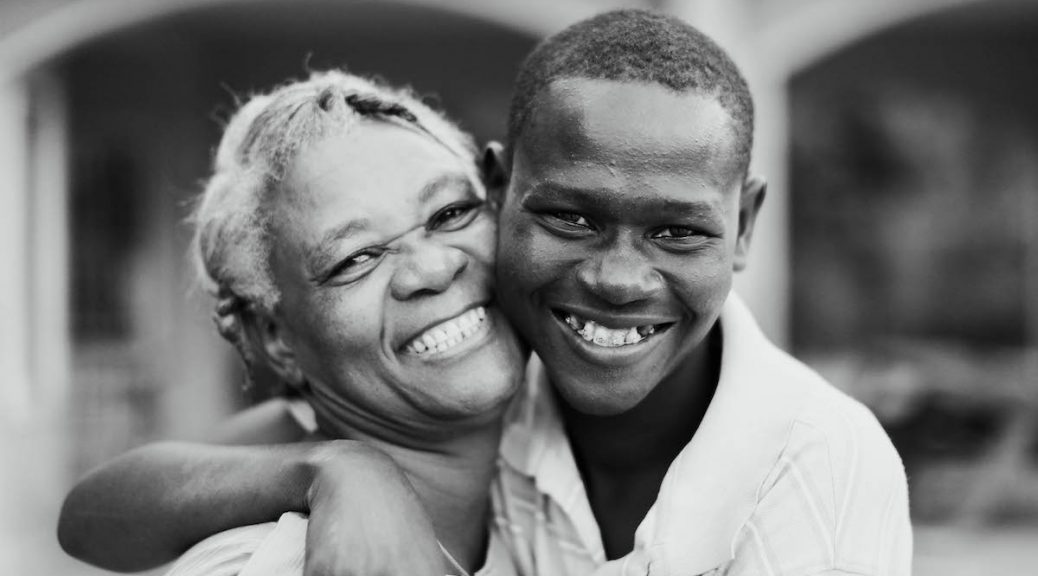 Today is Mother’s Day in Haiti, and there is one mama in particular we celebrate today.

Mama Odette, who turned 68 in March, had already raised 11 of her own biological children when she became the primary caregiver at the Lighthouse Children’s Home in 2015.

Hired by JiHM first as a cook for the Lighthouse in 2010, her maternal instincts were quickly discovered by the first of the Lighthouse kids, Johnny and Peterson, who came into JiHM’s care as toddlers. Through the years, Manmi Dadet, as she is affectionally known, has taken direct care of 11 Lighthouse kids, and today still lives with the six who call Lighthouse home.

Odette was born in Cameau, a tranquil rural village along a river, surrounded by banana groves. She grew up near the National Palace in Port-au-Prince in the 1960s.

“It was the best time ever,” she says of her childhood. “Life was easy and enjoyable.”

Her easygoing childhood is something she would love to replicate for the kids at the Lighthouse, but she knows they have faced a whole different set of circumstances in their young lives and grown up in a very different Haiti. Through her love and perseverance, Odette has become the biggest source of stability for them.

Anne Marie recalls being welcomed by Mama Odette into the Lighthouse in 2012, when the orphanage she had lived in since the 2010 earthquake shut down.

“When I had lost my mom, I thought I wouldn’t have someone to help me,” she shared, “but when I came to the Lighthouse, Manmi helped me.”

Johnny, whose earliest memories involve Odette, remembers being nursed back to health from childhood asthma. “She took care of me and made medicine for me until I was healed,” he said.

Odette says her ability to meet the nonstop demands of motherhood is only made possible by her faith. Though she’d gone to church for much longer, she truly gave her life to Jesus Christ just over a decade ago. It has made all the difference.

“My faith in Christ gives me more humility to do my job as I should,” she said. “It gives me more love and self endurance to overcome all the obstacles I face.”

The behaviors of a houseful of teenagers can be exasperating some days, and there have been moments she’s wanted to quit, but the Lord gives her strength to continue. “The Holy Spirit leads me into times of prayers often,” she said.

She has modeled this faith for each of the kids at the Lighthouse, and the Holy Spirit’s work in her life is evidenced by the way they describe her, with words like wise, understanding, patient, counselor, courageous, loving and kind.

A thousand moments together

Odette says the most rewarding part of her job is the warm affection from the kids as she serves them. They love spending time with her, recalling some of their favorite moments as the times they’ve worked together to honor her for her birthday or Mother’s Day. “We worked together to buy a big gift, and she loved it,” said Kimberly. “She even cried.”

All the kids like to cook with her, and Peterson and Johnny love when she joins them to play soccer in the courtyard. “It’s always a beautiful time for me with Mama Odette,” said Peterson.

Fedner likes to share jokes with her, proudly sharing that he’s never seen her sad. “She’s always happy, because I’m always making her laugh,” he declared.

Anne Marie and Kimberly enjoy the times when they just sit and talk, and she shares advice.

When asked to share the best advice Mama Odette has given them, each of the Lighthouse teens had a different response.

Kimberly quickly rattled off a list: “Believe in God, learn well in school, find something to learn when school is on break, always be obedient, and respect others.”

Johnny shared the advice he’s received most often from her in the past few years: “Don’t go out because the road is very dangerous.”

Anne Marie said, “She always tells me that I’m important and that I’m precious to God. She says to remember where I’ve come from, and know where I want to go.”

It is hard to overstate the impact that Odette has made on the children she daily lays down her life for. “Every day I wake up, she makes a new impact on my life,” said Fedner.

Kimberly echoed that sentiment. “The way she shows us how she loves us, that impacts us every day.”

Odette’s impact at the Lighthouse has reached beyond its four walls, as over the years she has welcomed hundreds of visitors to her table. If you have visited Haiti with JiHM in the past decade, you have probably been swallowed up by her big embrace and treated to her legendary chicken and rice.

These shared moments around the table are some of the favorite memories of JiHM guests—and the feeling is mutual. Odette says her favorite memories at the Lighthouse are hosting big dinners for visitors. “Our friends share love when they come to visit. They show me their appreciation,” she said. “I don’t speak English, but we still have fun when they are here.”

Odette is a true “fanm djanm,” a phrase that means strong woman in Haitian Creole. She exemplifies the best of motherhood as she sets aside her own desires for the well-being of the lives entrusted to her.

“She opens her arms to the poor and extends her hands to the needy… She speaks with wisdom, and faithful instruction is on her tongue.” Proverbs 31: 20, 26

Mama Odette, we honor you on this Mother’s Day. Thank you for your faithful service at the Lighthouse Children’s Home!