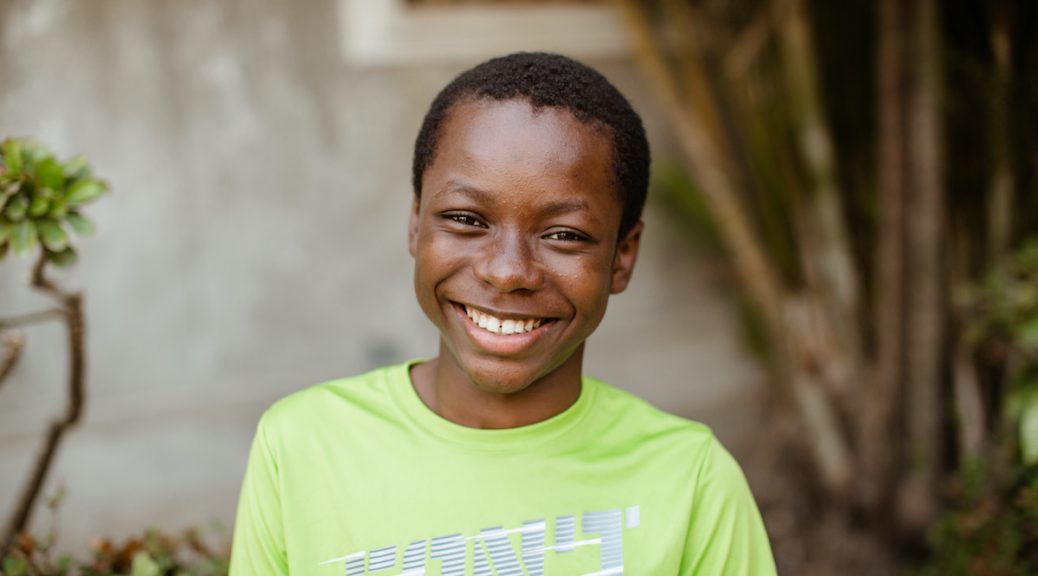 On April 10, “little” Johnny celebrated his 14th birthday. Although I could not be physically present for the celebration due to the restriction of travel over coronavirus, my thoughts were with him in the hopes that his birthday would be as pleasant as those of the past.

Johnny, who has lived at the Lighthouse since he was a toddler, has celebrated most of his 14 birthdays with us.

Mama Odette and Stéphanie, caregivers who have been here since his first days, often share with him memories of his childhood, recounting moments helping him bathe, changing his diapers, and taking care of him when he was sick, as well as funny stories about what amused him as a toddler and how he behaved.

Whenever they share these memories, their faces fill with pride. They love this young man and the role they have gotten to play in his life.

At 14, Johnny is inquisitive, always wanting to know more, test his limits, discover his abilities, and explore his potential.

Usually well-behaved, he can tease sometimes, but he cares for others. He is among the first to be present around the table on birthdays to offer good wishes, often encouraging his Lighthouse brothers and sisters to stay close to God as the best guide for their lives.

At school, he is very diligent. He gets good grades, usually among the best in his class, and never garners negative words from his teachers, who appreciate his enthusiasm. He and his brother, Peterson, are the most eager to work with Jean, the Lighthouse tutor, and will even contact him on weekends when they have trouble with homework.

Though the younger brother, Johnny watches over Peterson as much as Peterson does over him. He is his companion on the way to and from school. Even when Peterson’s classes were extended to help him catch up on state exam preparation time lost in the lockdown this fall, Johnny patiently waited for him in the schoolyard all afternoon to walk home together.

Johnny chooses his friends according to their shared tastes like video games, math and languages. He is always ready to share and help. During exam periods, he asks for permission from Jean to work with his friends so they can catch up together.

With our youngest now 14, it is no longer easy to use the word “child” for any of the Lighthouse kids. Time has passed so quickly. Yesterday’s worries are not the same as today. The Lighthouse “children” have grown up, both externally and internally.

As we celebrate each passing stage, though the paths traveled have not always been easy, we know they have been filled with the goodness of God, a fact which Johnny recognizes, too. Earlier this year, Johnny picked the word “positive” to describe his life at the Lighthouse.