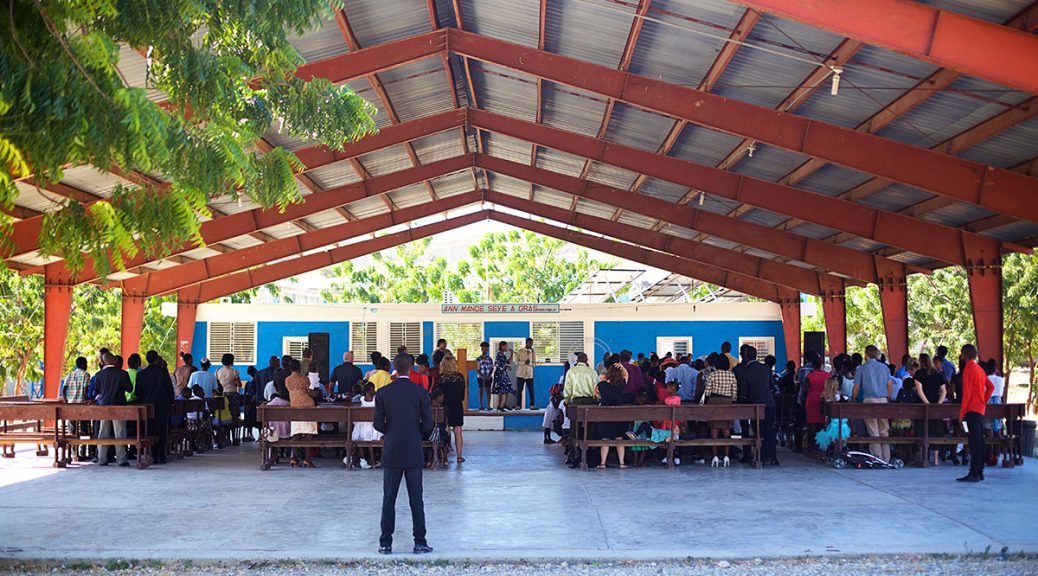 On Sunday, Victory Bible Church will turn 13 years old. Roger Carole, JiHM’s director of operations, was there at the beginning, and few people know and love this church more than he does.

Back in 2004, when JiHM was in its infancy, Roger was part of its core ministry team. This group of young men in their early 20s led a youth group that met at a local church on Saturday mornings and attracted many people who would not otherwise have stepped foot in a church.

“We noticed the people who were coming to youth group didn’t have a church where they felt welcome to worship,” Roger recalls. The men felt a burden to provide a place where everyone was welcome to worship just as they were—no matter their clothes or hairstyles.

“So we said okay, we have people and we want them to have a place to worship together. Let’s just go and gather instruments and we’re just going to sing. If people come, we’ll have a full service.

“We started, and people started coming.”

Growth through the gospel

This first service was held the last Saturday of May in 2004, and the church has been meeting ever since. Word spread about the different style of this church, and soon people were coming from surrounding villages to attend Victory Bible Church.

“The preaching was really different than anything they had ever heard before,” Roger explains. “We were preaching the full gospel. All the other churches were preaching sermons that only pointed out sin and blamed people, ranking sins. We preached the full gospel and showed all people the way to come to God, and how they could begin to make right decisions.”

He pauses to explain that this devotion to the gospel is what continues to drive Victory Bible Church today. “Jesus is the center of our church. And then the Bible. We have Jesus as the center of the church because the church is for Jesus. And the Bible is what we live on. Its principles are what we believe. We want people to believe the Bible and believe in Christ.”

A place of their own

Victory Bible Church met for the next five years on Saturday nights, renting another church building for the evening.

In 2009, the church moved just up the road onto property newly purchased by JiHM. That first morning, Wesley Altime, the former worship leader, put the musical instruments into the back of the truck and led the people in worship as they marched in a parade from the old location to the new mission.

For the next few years, the church met under a large circus tent. Numbers swelled to several hundred after the earthquake, when church attendance grew rapidly all over Haiti. In January 2012, the tent was permanently replaced with the structure where VBC currently meets.

In reflecting on the life of the church, Roger’s favorite memories center around sweet times of fellowship. He particularly loved this Easter, when the church gathered for feet washing and shared a meal together.

“Taking communion together really shows that we are a family and we enjoy being together, we drink from the same cup and pass it along,” he says. “I love it, I wish we could do that every day.”

This year’s anniversary celebration will focus on fellowship, as well as thanking God for His faithfulness to the church.

The week preceding the anniversary will be filled with 3-hour revival services every evening.

On Sunday morning, as is customary in Haitian churches, many singing groups from other churches will perform, including a men’s choir from Port-au-Prince. Guest speaker Pastor Pierre Rigaud Julien will give a sermon from Nehemiah 2 on building the house of the Lord. Julien is a Haitian American, retired from the U.S. army, who converted later in life and now serves at several ministries in Haiti.

Following the service, the congregation will share a full meal together—just as Roger loves.

We praise God for Victory Bible Church and the many lives who have been transformed by the gospel preached through this body of believers. Many of you have been part of the team that has encouraged and trained our pastors, or given over the years to bless this congregation. Thank you!