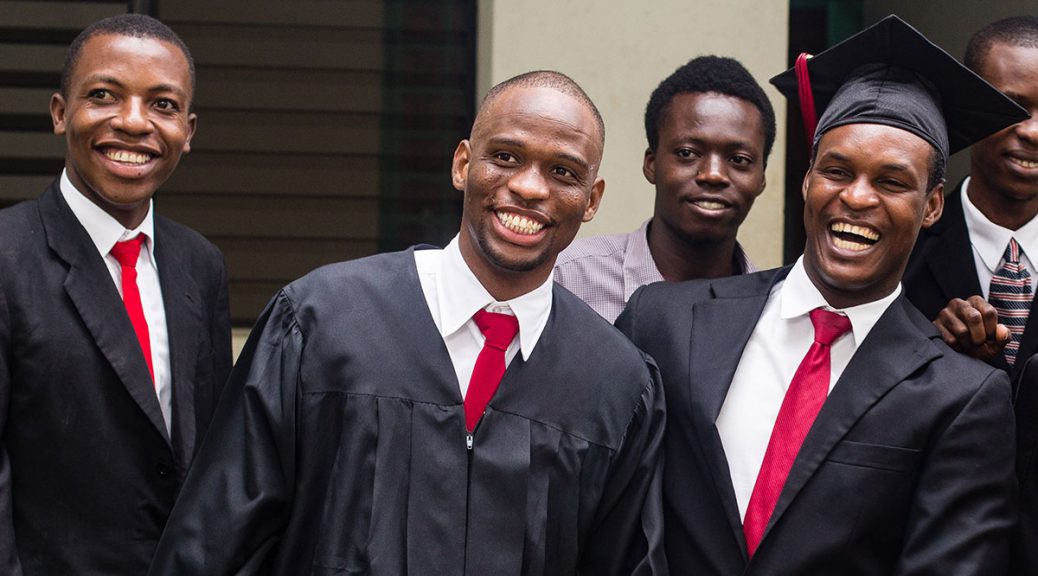 His story is the ultimate underdog story. Orphaned at a young age and dismissed by his community as a foolish boy, Derson Louis got into fights and did poorly in school. He had no future.

Last Saturday, that same boy graduated from seminary with flying colors, at the top of his class.

No one but God knew the beautiful future that lay ahead for this child of His.

No one but God writes these kinds of stories.

Derson was born in April 1991 to devoted Christian parents in Source Matelas, Haiti—parents he would never get the chance to know.

“After my parents died when I was very little, things were very difficult for me: school, food, clothes, a place to sleep,” Derson shares. “My future was very uncertain.”

“I remember when I was young the people in my neighborhood used to call me ‘crazy person.’ That was the worst. I believed that’s who I was, and so I acted like it. I liked to fight because I didn’t know the difference between right and wrong, and I was bad at learning in school. Yet during these awful circumstances, the plan God had for me never changed.”

From darkness to light

Derson doesn’t really remember what year he became a Christian—he just remembers asking a pastor after church one Sunday to lead him to Christ. Shortly after that, at age 13, he began taking part in a new gathering of believers that would become Victory Bible Church, who were meeting on Saturday nights in the church Derson had been attending.

“In 2005, God started another chapter in my life with JiHM,” Derson says. “I no longer lacked any necessity for me to live.”

The Holy Spirit was at work in powerful ways, and Derson’s character began to change. “I don’t understand how, but God began to remove the flaws of my life, and He gave me the capacity to learn in school.”

His first dream was to become a mechanic, though he says he didn’t really have a reason for it. Then God slowly started to reveal a different call on Derson’s life.

“Since 2008, I’ve felt like God put it on my heart to preach. Every time someone was preaching, it always inspired me to want to do the same, but I was very shy and scared to talk in front of people.”

Slowly, God grew his capacity and his courage. “In 2010, I started to have the opportunity to teach Sunday school. Despite being embarrassed to do it, I felt like it was what I had to do. Then I started preaching in Wednesday services, and finally I started to preach on Sundays. Over time I began to feel like I couldn’t do anything besides preach.”

Derson finished high school in 2015, passed the government exams, and started seminary in Jacmel the next fall.

“Now by the grace of God, today I have completed seminary,” Derson says in wonder. “All of this is due to the faithfulness of God in my life.”

When Derson graduated on Saturday, May 25, there was an entourage from his hometown who made the 6-hour trek to Jacmel to cheer him on. Dan Neal, JiHM board chair, who has known Derson since 2007, traveled from Cincinnati to attend. Cody Cannon, former board chair and a pastor in California, also made the trip.

Cody, who has been visiting JiHM since 2012 and growing a mentoring friendship with Derson ever since, called being at Derson’s graduation a life-changing experience.

“Just thinking about Derson’s story—at any point of it, he could have stopped. He could have given up. Many people would have told him it was justified. But he had his sights set and nothing was going to stop him… It was pretty unreal to be there.”

As Derson thinks about returning to Victory Bible Church to begin serving as head pastor this fall, he feels both excited and nervous.

“I’m most excited to serve Victory Bible Church because this is where I feel that God wants me right now. I feel like this is my home, I love these people, and this is where I grew up, too.”

He’s nervous because he’s never been a senior pastor before, and doesn’t know what that will be like. He also gets nervous about making difficult decisions that could cause him to lose friends that are very close to him.

Though he may have graduated with a degree in theology, he says he’s not finished learning. “When I entered seminary, I thought that I knew lots of things, and I really didn’t know anything,” Derson said. “Seminary changed how I understand many things, and it made me understand, too, that I must always be learning more.

In the long term, he hopes to earn a masters in systematic theology or Christian leadership.

In the short term, he wants to begin teaching a disciple formation class, and in the fall will be ordained as a pastor. He also says he would like God to help him find someone to spend the rest of his life with.

As he reflects on the ways God has been faithful to him, Derson is filled with gratitude.

To his friends through JiHM, he says, “I would like to thank you for the four years you supported me with everything I needed for seminary. I believe you won’t regret your investment in me. I hope that God continues to bless you more so you can continue to bless other people. I love you a lot.”

He also expresses gratitude for his brothers and sisters at Victory Bible Church, “They were always there in prayer for me, and always encouraged me,” he says.

Derson’s story stands as a testament to the truth of his favorite Bible verses:

“Trust in the Lord with all your heart and lean not on your own understanding; in all your ways submit to him, and he will make your paths straight. Do not be wise in your own eyes; fear the Lord and shun evil.” Proverbs 3:5-7

Derson, we are so proud of you, and praise God for what He has done in your life!