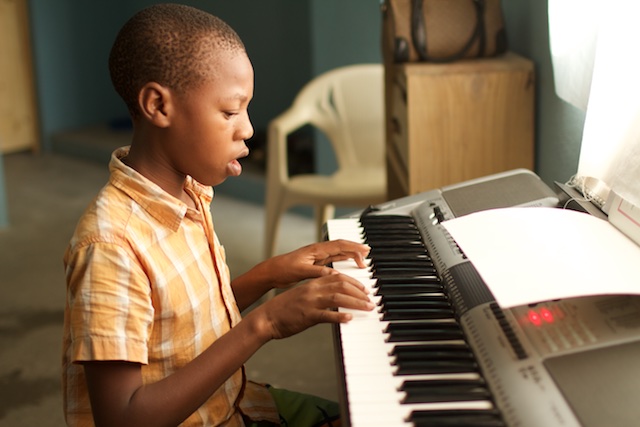 He is kind and gentle. He is wildly brilliant. He is authentic and brave and sometimes silly. He is labeled by the rest of the world as handicapped but his family and friends simply call him Gervens.

Gervens (whose name is pronounced like Jovens) is born on Valentine’s day in 2003. He is born into extreme poverty and enters this broken world blind, with a condition that could have been cured had his family had access to proper health care. And so he grows up unable to see the rest of life around him, unable to see the faces of those he loves, unable to see the paint color on his home, or the beautiful mountainous backdrop that graces Haiti’s sky.

It’s January 2010 and Gervens’ story leads him to the Lighthouse because his parents feel unequipped to care for him. Just a week later on January 12, 2010, the horrendous earthquake strikes Haiti, killing over 200,000, destroying homes and ripping apart families. The room in which Gervens spent the first seven years of his life collapses and the reality of this miracle is evident. The Lord has spared Gervens’ precious life.

This transition has brought change into his life. Gervens currently attends a school for the blind and is not only learning, but excelling. This opportunity was no easy feat. Special needs schools are few and far between in Haiti and the acceptance rate is low. But in October 2013, Gervens began his academic career at his new school. His teachers boast of his progress, providing this young scholar with the confidence to persevere. He is surrounded by other children who battle the same hardships he daily faces and he is treated the way he ought to be, as a beautiful child of God.

Most recently, one of Gervens’ greatest dreams has become reality. For over a year, Gervens had asked for a piano. Many visitors heard of this request. With each passing month, Gervens’ desire became greater. Last October, Gervens befriended a visitor who fell in love with this boy’s sweet and captivating spirit. After spending a week developing a relationship with Gervens, the man returned home and just one week later, sent a full size keyboard to Haiti. The sheer joy on Gervens’ face after receiving this gift was inexplainable.

Since then, Gervens has been taking piano lessons every Saturday morning. And every Saturday, his music teacher reiterates Gervens’ intelligence. Just a few weeks ago, he accompanied his house mom, Richena, on the keyboard while she sang at church. The congregation was in disbelief, in awe of Gervens’ gift to play. Richena exclaimed excitedly that several people even cried.

The congregation was in disbelief, in awe of Gervens’ gift to play. Richena exclaimed excitedly that several people even cried.

Gervens can always be heard from his room playing, practicing chords and learning new songs by ear. (Watch a short video of him playing.) He has even mustered up the confidence to play for visiting teams.

Five years have passed since Gervens moved into the Lighthouse and today he turns 12. His life is certainly not easy, but he is filled with joy and surrounded by love. He is seen, he is heard and he is known. To know Gervens is a gift.

Would you consider partnering with the Lighthouse to support Gervens as he continues to grow into the young man God created him to be? His dreams are big and his story is redemptive, and the best is yet to come.