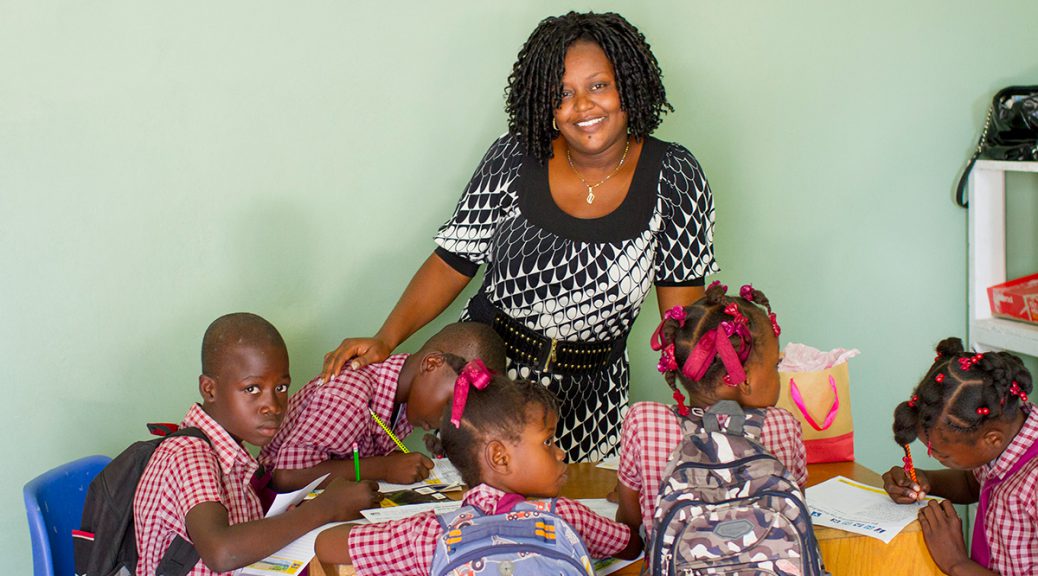 Our group is visiting Iselande’s house, casually looking through her photo albums and chatting before we get started preparing chicken and rice for lunch. Among the neatly preserved photos of her teenage years, I see a photo of a young American woman. I ask Iselande about her.

“That is Mary Anne. She was my sponsor in school,” she says. The smiling, blond-haired woman is striking a distinct pose, and Iselande can tell I’m curious about it. Flipping back a few pages, she finds a photo of herself doing the same thing. Years ago she had sent that photo to her sponsor, who had playfully sent Iselande a copycat photo of herself a few months later.

It has now been 13 years since Iselande graduated from high school with Mary Anne’s support. And although Iselande has lost touch with her, the impact of Mary Anne’s investment in letters and education lives on in Iselande’s work at Grace Emmanuel School.

As the Haiti-based sponsorship coordinator for GES, Iselande manages the translation of all the letters coming from sponsors, and then works to distribute them to the students, helping them write responses. She also purchases birthday gifts for students when their sponsors send an extra gift, and coordinates the purchasing of Christmas gifts for all 360+ students every December.

“I have a heart to work with kids. I love my job,” she says. “I want each student to be comfortable with me and know that I am always here to help them.”

After graduating from high school, Iselande attended culinary training and then began working for Grace Emmanuel School as one of the first two cooks. As the number of students grew, so did her responsibilities directing the kitchen. After training in her replacement in 2015, Iselande was able to transition into a new role in the sponsorship office, which was much needed as sponsorship at Grace Emmanuel School had grown to over 300 students sponsored.

Iselande’s familiarity with the letter writing process from her own experience writing to Mary Anne gives her a unique understanding of the relationship-building process that she now helps facilitate. And because she understands first-hand the hardships that GES students are dealing with, she believes firmly in the importance of sponsorship.

“Many of our students would not be in school without the sponsors of Grace Emmanuel,” she says, with heartfelt gratitude. “The students receive books, food, everything they need. There isn’t another school like it. These students have many opportunities—even more than I had when I was in school.”

Iselande says through her work, she hopes to encourage sponsors to continue the good work they are doing. “It makes me proud to translate each sponsor’s letter into Creole. The encouragement they send to their students fills me with more love for the students as well.”

We thank God for the way He has uniquely prepared Iselande to serve Him joyfully at Grace Emmanuel School, bridging the gap between students and sponsors.