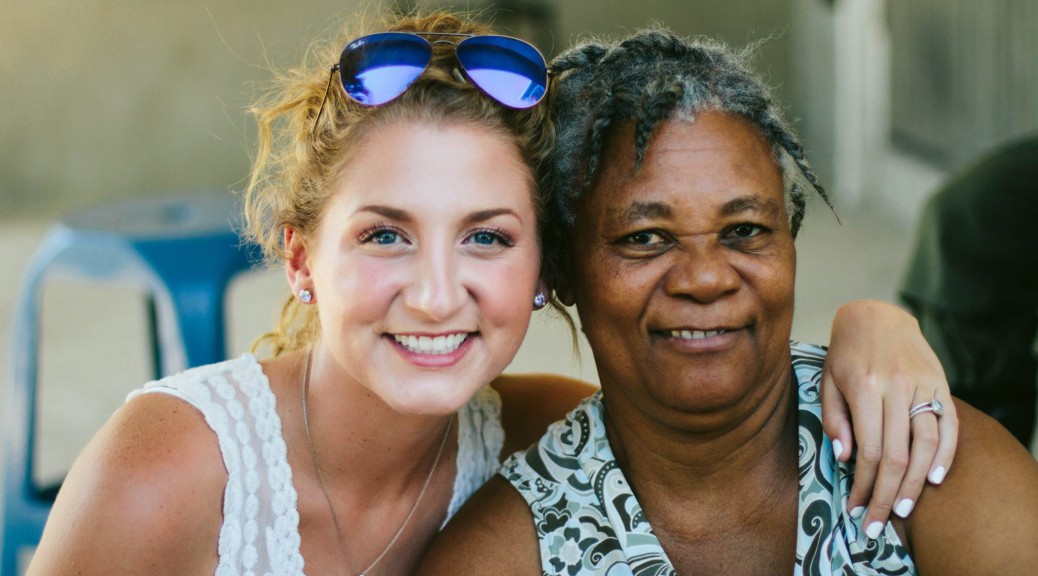 I knock on her door, peeking through the glass and the sheer white curtain into her bright, Pepto-Bismol pink bedroom. She turns her head and squints her eyes as a huge smile sweeps across her face. Cherie! Vin non! (Sweetie! Come in!)

I step inside, brushing aside the curtain, and sit in one of the plastic chairs she keeps for the visitors which constantly grace her room. Kijan ou ye pitit fi mwen? Ou poko benyen? (How are you my daughter? You’ve not yet showered?) Our evening conversations almost always begin like this because she, as she does best, has taken it upon herself to love me like one of her own. Odette, one of the caregivers at the Lighthouse, is truly a gift from the Lord.

I still remember visiting her several years ago at her home in Cabaret. She had recently left her partner of 24 years (which I would learn later), and had returned to her hometown. On this day, she wore a white blouse, a dark wash jean skirt, and donned a short bob. She still recounts that day too, reminiscing on the moment she first met me.

It was not long after that encounter she was offered a position as caregiver at the Lighthouse in March 2010, just two months after the earthquake. She is quick to remind me of that date and her longevity with the kids.

I also remember the dynamics of our relationship when I first moved to Haiti in December of 2013. Me—the young, single girl, fresh off the plane from the USA—wanting to implement my ideas, my plans, my strategies. With little knowledge of the culture, it undoubtedly appeared I was infringing upon not only Odette’s power, but also her ability and experience as a mother.

For the first two months, there was constant friction between the two of us. I tried to give her the value and recognition she deserved, but I still felt terribly discouraged. This sweet, precious woman with no hate in her entire being, despised me. Or so I thought.

But over time, as she realized I posed little to no threat, her heart not only softened toward me, but she embraced me. And I found I was the one who had much to learn from her.

Caring for 11 children together

Last September, when I transitioned into the role as caregiver, I became her co-parent, although I often feel quite inferior to her. I had obviously known Odette before, but I could never have imagined that this 62-year-old woman would become my beloved friend, that I would truly come to know her.

And so after the kitchen has been cleaned up from dinner, I meander to her pink bedroom, where I often find her chatting with one or two of the kids. As I sink into one of the plastic chairs, the exhaustion of the day catching up with me, I relish in these sacred moments, moments to learn from her and to learn about her.

She has shared with me what life was like for her as a child, how Haiti was different, better, she describes.

And she has told me about how leaving him brought her to Christ.

Serving the Lord under grace

This woman exudes the love and light of the Lord. She often reminds me of how she first “converted” when she was 40, but her faith didn’t become real until just over the past 10 years. Today, she’s committed to dedicating the rest of her life to Him because of the grace He has poured out onto her.

I often imagine the beautiful home the Lord is preparing right now for her in heaven, for her service, the way she relentlessly and unconditionally loves people and the unwavering hope she places in Him.

A couple of weeks ago, we celebrated her birthday. She doesn’t like to go out often, but I took her out to lunch, just the two of us. She laughed when we both ended up ordering the same meal; and she also reminded me she had to be back by 3 pm so she could go to church at 4 pm to take part in communion.

She thanked me over and over again for the afternoon, assuring me God will bless me. But I told her she is the one who will be blessed.