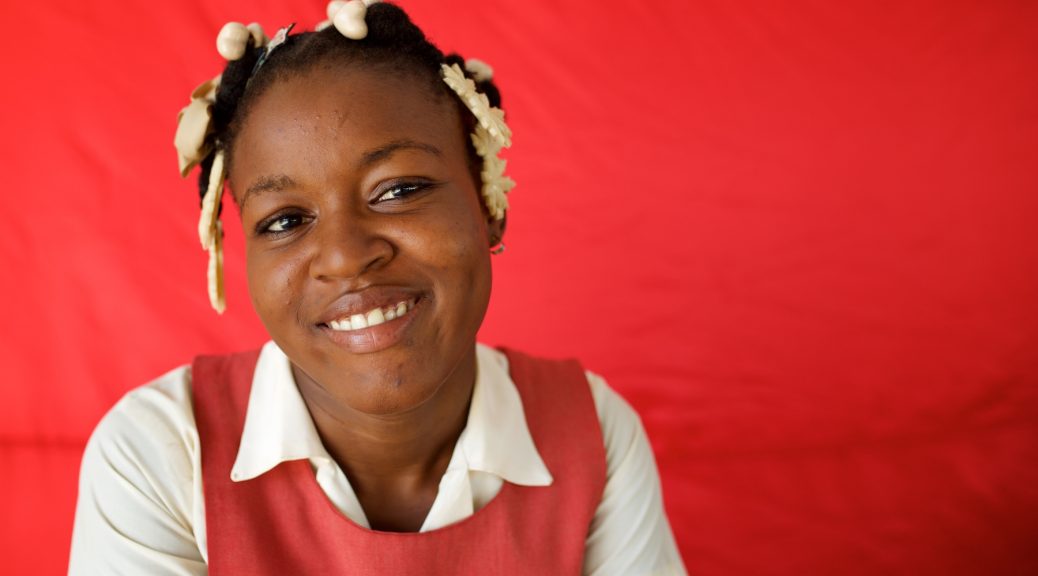 We often share that this month’s Haitian Hustle supports the education of nearly 400 students in Haiti.

Yet do you really know how lives are transformed through this race, or futures made brighter through free education?

For a glimpse of the hope you help make possible, here’s one student’s story—Renia, a 9th grader at Grace Emmanuel School.

Kidnapped by her dad before she was 2 years old, Renia grew up with her grandma. She never saw her mom; her dad had threatened to kill her if she ever came looking for her daughter.

At age 3, Renia began the customary 3 years of kindergarten, but her education stopped before first grade. Her grandma could no longer afford it.

When Renia was 9 years old, her dad remarried and she returned to live with him and her new stepmother. She was initially delighted, thinking this might mean an opportunity to begin primary school.

But her delight quickly turned to misery. Not only was she deprived of school, she was also mistreated as a restavek (a child slave). She was forced to do work beyond her physical strength and treated as inferior to the other children in the house. Her stepmother constantly reproached her for being a burden.

“I often thought about suicide,” Renia confided with sadness. “I was humiliated all day long, and worst of all, I had no news from my mother. I knew if she was there I might still not go to school, she’s very poor, but at least I would be treated like a person.”

Three years later, Renia moved again, this time to live with her late godmother’s husband. He needed help with housework and promised to enroll her in primary school.

But though her wish to go back to school was fulfilled, her living conditions did not change. At 12 years old, Renia not only did the housework, but fetched firewood in the desert, took care of the livestock, and carried water—a round trip of 2 hours that involved climbing several mountains every day.

“I was constantly tired from all this work. If I refused, he would beat me severely,” she said.

“In those moments, I often prayed. I found strength there,” she remembered. “When I closed my eyes, I felt consoled.”

During all these years, Renia wanted to attend church but the only dress she owned was the one she had worn to a temple when she was 6 years old.

She often thought of her mother and how things would be different if she was around. No one took her to buy new clothes, no matter how tall she was or how threadbare her clothes appeared.

Then one day, her godmother’s niece came to visit the home and brought her a new dress as a gift.

“It was the first gift given to me in so many years,” Renia said. “I was so happy. I expressed the desire to move and live with her, believing that for sure my life would really be different this time.”

In September 2013, 14-year-old Renia came to live with her in Source Matelas.

Her new foster mom worked as a housekeeper for another family—and soon Renia was at work again.

“Once I arrived, she asked me to do all her work for her,” she said. “She only did the cooking, I took care of everything else, even the laundry.”

For two years, she was able to go to school through a scholarship from the national cement company, awarded based on her good grades. But overall, life wasn’t very different.

“I had the same workload,” she said. “I was mistreated and beaten when I complained, and I still had not heard from my mom.”

In 2015, the company stopped giving the scholarship.

A friend of the family she worked for was a teacher at Grace Emmanuel School. He helped get her enrolled.

“Everything I had endured in my life up until then was for the sake of an education, so people would pay for me,” Renia said. “Now here I was at a free school and I was treated with so much respect. Not only that, but the level of education far exceeded the schools where I had been.”

A huge burden had been lifted off of Renia’s shoulders.

She would no longer be forced to work to be able to go to school.

Running away and finding home: 2016

Her living conditions hadn’t changed, but Renia now had the confidence to do something about it.

On February 7, 2016, after refusing to be severely beaten by the woman she lived with, Renia escaped the house and took refuge with another relative.

The family she had been helping do housework for learned of her plight and launched a search. They offered to take her in and provide for her. They had been unaware of everything she had endured when they were not at home during the day.

Renia agreed, remembering they had always treated her well when they were present.

“When they spoke to me, I felt like I existed,” she said. “They addressed me like they did their own children.”

It was hard for her to believe that total strangers treated her with such respect and were willing to provide everything for her.

Yet no matter how much Renia’s living conditions had improved, she kept thinking about her mother. “I prayed to God to protect her and guide her path.”

In 2018, God orchestrated a chance meeting in a market between two mutual acquaintances from Renia’s past. They exchanged numbers, and eventually Renia and her mother were  reunited.

“When my mother saw me, she cried.” Renia remembered. “She said the last time she saw me, I only had two teeth. Now I’m a woman.”

“She wanted to know everything about how I was living,” she continued. “She wanted to give me whatever I lacked with my foster family. She called them mom and dad.”

“She told me that all I had been through and endured in my entire life was leading me here. I was not praying in vain. God heard me.”

In the future, Renia hopes to raise awareness in her community for better treatment of children. Even if her life is relieved now, she still experiences pain from the traumatic memories of her life.

Yet she also believes God will help her to forgive and overcome all of it. And she now has healthy relationships in her life to support her.

“Since my first day at GES, I’ve been friends with Lourdenie,” Renia said. “She knows my story and that hasn’t changed anything between us. She’s like a sister to me. We both were separated from our mom early in our lives, even though hers has died. We rely on each other. She encourages me to study and to always give the best of myself. She’s a friend that I will cherish all my life.”

“Many of the other students have become like a family to me,” Renia continued. “I never had that in my early years.”

“Grace Emmanuel School was the turning point in my life.”