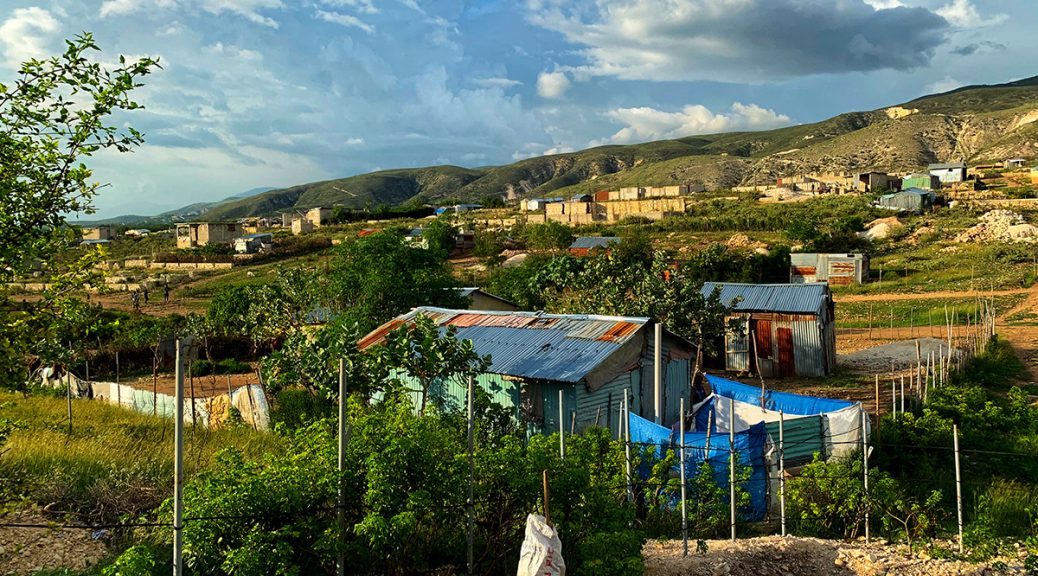 It was 9:30 in the morning on Monday, May 2, when the teenagers from the Lighthouse and Mama Odette packed what they could carry into backpacks and buckets, said a prayer for protection, and closed the gate behind them.

They began to walk eastward through yards and alleys, avoiding roads and staying alert to any activity around them. Gunshots continued to ring out.

After two long miles of walking, they reached an unblocked portion of the national highway where Roger, JiHM’s director of operations, waited to pick them up.

In the middle of a war

Before their escape, the Lighthouse had spent just over a week sheltering at home as two rival gangs attempted to take over their neighborhood. The gunfire was constant and close. It was the first time the area had been right in the thick of gang warfare.

“It was the worst experience I could have had,” said Kimberly. “It was sad, and I was so stressed.”

“Honestly, I was really scared,” said Fedner. “That was the only thought running through my head at the time.”

As the Lighthouse kids watched and waited, their social media feeds filled with horrific stories, images, and videos of the evil acts being perpetrated by the gangs, who were attacking civilians as frequently as opposing gang members.

The days of warfare left a trail of bodies—men, women, and children—who had been shot, mutilated, or burned. Children as young as 10 were gang raped. The violence in Haiti, said the UN Commissioner for Human Rights, has “reached unimaginable and intolerable levels.”

After finally being able to flee with the rest of the Lighthouse, Mama Odette said the whole experience was terrifying. “I am a strong woman,” she said, “but I couldn’t handle that.”

Unsure how long the fighting would continue, the kids from the Lighthouse settled into four different homes of JiHM staff and their families, joining the list of thousands of other displaced persons in Haiti. Though they normally attend a school just down the road from their house, they came to class at Grace Emmanuel School as they waited for peace.

The kids received a warm welcome at GES, but it was impossible for them not to be preoccupied with the experience they had just gone through, thinking about all of the unknowns for their future.

“I felt better in a different place, but no place in Haiti has security,” said Kimberly. “I’m always under stress.” She said that Psalms 29, 91, and 118 have been her constant prayer.

After a couple of weeks, the fighting let up. Police took several gang members into custody, and a tenuous peace returned to the area.

The school that the Lighthouse attends reopened in mid-May. After waiting another week to see if anything would flare up again, the kids returned home.

Fedner said he was relieved to go back to the Lighthouse, but Kimberly says she is constantly filled with apprehension and fear.

“We don’t know when something like that could happen again,” she said.

Roger agrees. No one knows how long the peace will last, because the objectives of the gangs haven’t changed and Haiti’s floundering justice system has no means of keeping the violence in check.

Essentially, he said, the gangs are well-organized employers, funded by politicians. “People join gangs because they have no other hope.”

Last Sunday afternoon, while Roger drove home after dropping a friend off in Bon Repos, a man ahead of him on the road pulled out a gun and began waving wildly at Roger to pull over.

“I have two options,” Roger remembered thinking. “If I stop and pull over, he will rob and potentially kidnap me. If I make a run for it and he shoots, I might die.

“I decide I’m not stopping. As I get closer to him, he keeps saying, ‘Pull over! Pull over!’ And I’m yelling back at him, ‘What do you think you’re doing? Stop doing that!’ I’m praying, God please don’t let him shoot. Because if he shoots, I’m dead. Please don’t let him shoot. I was scared inside, but my reaction outside was not scared. I kept going, I passed him, and he put the gun down. I kept checking my body to make sure I hadn’t been shot. I was safe. Thank God. Thank God.”

The incident happened on a stretch of road that Roger travels multiple times each week, about 8 miles from the mission property where Grace Emmanuel School and Victory Bible Church meet. Several other staff members also take this road on their way to and from work.

“It’s a really scary time right now,” Roger shared. “I’m not scared for myself, I’m scared for my family. The gangs are everywhere in Source Matelas [the village right by JiHM’s property], recruiting people, and trying to build themselves up.”

Roger says that John 14:1 has become a lifeline to him through these times, as he repeats Jesus’ words to himself: “Let not your hearts be troubled. Believe in God; believe also in me.”

He is well aware that the struggle in Haiti is not against flesh and blood, but against “the powers of this dark world and against the spiritual forces of evil in the heavenly realms” (Ephesians 6:12).

“We are looking for a miracle for this country,” he said. “We need the gangs to change their minds. The Bible says we need our hearts to be changed from rock to flesh. That’s what we want for these gangs. Transformed hearts.”

We need your prayers

As the work of JiHM moves forward in adversity, our leadership and staff ask for your prayers. Lift your voices together to our sovereign God, just as the early church did, praying:

“…And now, Lord, look upon their threats and grant to your servants to continue to speak your word with all boldness, while you stretch out your hand to heal, and signs and wonders are performed through the name of your holy servant Jesus.” (Acts 4:29-30)

JiHM remains committed to the long-haul work of transforming hearts so that all people—both those experiencing the violence and committing the violence—can experience abundant life in Christ. We know now more than ever that this work is dependent upon the Spirit of the Lord, who works miracles and speaks peace into the hearts of those in Christ, no matter the circumstances.

Thank you for continuing to partner with JiHM to shine the bright light of Christ in the midst of very dark times.