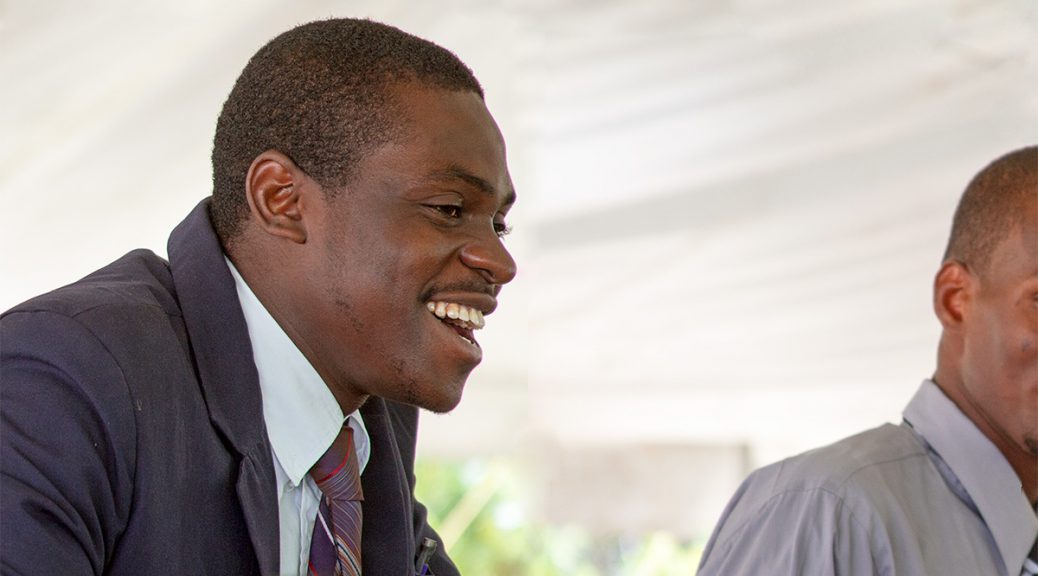 Dieuvert Privé has one all-consuming passion in life—that more people would know the good news of Jesus Christ. Whether he is preaching to the congregation, leading a prayer service, or teaching Sunday School, Dieuvert’s zeal for God is evident in all he does.

But this was not always the case. It took a near death experience and a dream to “push” Dieuvert into ministry.

Saved for a purpose

In 1996, at age 12, Dieuvert became sick with typhoid. His mom took him to the hospital, where they prescribed a medicine called Afebril—a simple, anti-fever drug.

But the medicine didn’t help Dieuvert get any better—in fact, he took a turn for the worse.

Dieuvert’s mom soon learned that the medicine she had been giving her son was contaminated with diethylene glycol—an ingredient in automobile antifreeze. Over 60 children had already died from it.

Essentially, she had been poisoning her son.

Two more weeks passed in excruciating pain for Dieuvert as he experienced acute kidney failure. The doctors told him they couldn’t do anything for him. He would surely die.

The doctors told him they couldn’t do anything for him. He would surely die.

Dieuvert’s mom pleaded with God, “If You give him his life, he will serve You with it.”

After one month, his symptoms miraculously began to improve. He was the first to survive the poisoning.

One year later, Haiti’s minister of health came to visit Dieuvert, following up with anyone who had been prescribed the same drug during that time period.

They were told that over 500 children in Haiti had died from Afebril. Only 12 survived, and all of them had side effects. (News reports from this incident, widely investigated by the FDA, indicate 88 children died total—but that was only what hospitals officially recorded in Haiti.)

For Dieuvert, the side effects were debilitating. He couldn’t remember anything in class. “I couldn’t hold anything in my head,” he recalls. Doctors told him he wouldn’t be able to finish school.

Finally in early 2000, he and the other survivors were sent to Cuba for examination. He was having trouble seeing and awful headaches. Doctors in Cuba provided treatment for over a month, but concluded he wouldn’t live to his 18th birthday. The poison was destroying his brain.

Dieuvert came back to Haiti, and eventually graduated from high school—defying all the odds.

“Everything the doctors said was right, but God changed everything for me for His glory,” he says.

No one can resist the power of God

After high school, Dieuvert’s mom and pastor were in agreement—God had a call on his life, and Dieuvert would be a pastor.

But Dieuvert resisted for years. He was determined to become a doctor.

“One day I finally told my mother, if God wants me to be His servant, first He must show me His face, and second, He must send me to seminary.”

That night, Dieuvert dreamed he did indeed see the face of God.

“When I saw Him in my dream, I was very afraid,” Dieuvert recalls. “He called to me, ‘Dieuvert—why do you resist me?’ I felt God pushing me off of a mountain and I woke up, falling out of bed.”

It was 3 am. His mom was also awake. She had just seen the same vision.

Too agitated to wait any longer, Dieuvert headed to his church at 5 am. His pastor was waiting for him there. He asked him, “Dieuvert, why do you resist God?”

Seminary had been Dieuvert’s second condition. He went to a seminary in 2009 to take the entrance exams. He passed with high enough scores to receive a half scholarship.

His mom paid for the other half, though she wouldn’t live to see him graduate. She died during his second year.

Pastor Dieuvert has been attending Victory Bible Church since 2010 and serving as a part-time teaching pastor for most of that time. After graduating from seminary in 2015, Dieuvert became the administrative pastor.

“Our church has been built by God,” he says with confidence. “God uses us to preach the gospel. It’s not our church, it’s the church of Jesus.”

Through several leadership changes, Dieuvert has been constant, staying to serve God and help people come to know Him.

“I’m never afraid because God is my incomparable defender.”

His vision for Victory Bible Church is for it to be a church filled with the power of God so that many experience His Holy Spirit. He also hopes to have a seminary that would train pastors—equipping others to reach even more people with the good news.

“The doctor told me I was supposed to die when I was 12. Now I’m 33 and I hope God has more years for me,” Dieuvert says. “I’m never afraid because God is my incomparable defender.”