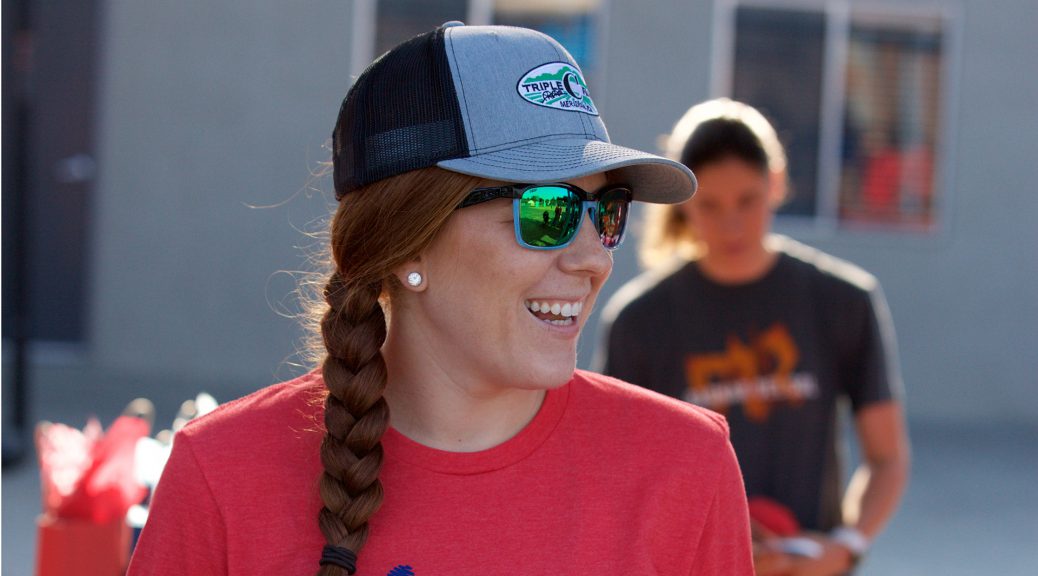 Every summer on the 3rd Saturday of August, friends of JiHM all around the world take part in the Haitian Hustle 5K. Since starting in one small town in Minnesota in 2011, the Hustle has grown each year, with over 400 people participating in 15 states in 2017—plus in Haiti.

The Haitian Hustle is rooted in friendship and offers a unique opportunity to gather with your church and community around a shared love for Haiti and for Jesus—and to put that love in action for the kids living at the Lighthouse Children’s Home and the students at Grace Emmanuel School.

In 2017, over $22,000 was raised for the Lighthouse kids’ education and living expenses. Our goal in 2018 is to raise $30,000 for the Lighthouse & Grace Emmanuel School—but we need your help! We are looking for more churches and communities to step up and host their own Haitian Hustle.

Before you delete this email and say, “I couldn’t possibly do that!,” take a few minutes and read the Q&A below with Melissa Chesini. Last year Melissa, who attends Life Pointe Church in Woodland, CA, stepped up to host a Haitian Hustle in Woodland for the first time.

If you don’t think you could do it, too, Melissa says, think again.

Q. What motivated you to host a Haitian Hustle?

In our community and in our church, we have a lot of active people, whether they run or walk or work out— there are just a lot of people who like to move. A bunch of us in our small group had done other 5Ks together, and our church takes supporting Haiti super seriously. So we just figured if we have a bunch of people that want to move for health reasons and love Haiti, why not?

Q. What did you want your Hustle to accomplish?

I didn’t really have a specific goal since it was my first year—just for it to run smoothly and that we wouldn’t show up that morning and realize we had forgotten something major. Really, just to pull it off! And we did! This year I plan to market the event more and get more people involved.

Q. What surprised you most about hosting this 5K?

Honestly, it surprised me how easy it was. I had never put on a 5K before, I’ve run in dozens of them but when someone said, “Hey, do you want to do this?,” my first thought was “Oh my gosh, oh my gosh, oh my gosh.” I kept running through the checklists of what the components of the races were that I’ve run, and thought “I have to be missing something, it can’t be that simple.” Our race was smaller, but I felt like at the end of the day we checked all of our boxes and had all the pieces we needed to have and it didn’t require hours and hours and weeks and weeks of planning, it was relatively easy to complete. And everyone had a really good time!

Q. So, how much time did you put into organizing?

The plus side of having been in races before was I was already familiar with them. I already knew where to get bibs, and ordering those took like 15 minutes. Honestly, the thing that took me the most time was constructing a balloon arch for the finish line, because I chose to blow up the balloons rather than spend money on helium. I also spent a few hours on Pinterest looking for prize ideas for age group winners and gifts for kids, and then crafting those.

Q. What would you say to someone considering hosting a Hustle?

DO IT!! It’s super cool, the experience of putting on the event is great! The people have so much fun whether by being seriously competitive and finishing in 15 minutes, or finishing in an hour. Or maybe it’s just trying to beat your pastor at the finish line! It’s just an awesome, bonding experience across all levels. Do it because everyone gets to bond, and if you’re going to do it, you definitely don’t have to worry about doing it all by yourself. JiHM is a HUGE help to keep track of registrants and T-shirts, my church’s secretary helped out with contacting people for beverage donations, other friends who like to run helped out with other pieces. Do it because you won’t have to do it by yourself!

And just have fun with it. A 5K is simply running a race. It doesn’t have to be done in a specific way, make it your own, make it fun. No need to be conventional! One of my favorite things from our Hustle was seeing the kids who had received bubbles as prizes from their own mini Hustle cheering on their parents at the finish line and welcoming them in with a sea of bubbles.

Q. What would you say to someone who says it’s August and it’s too hot to run a 5K?

I am that person! I don’t like to run when it’s hot. When I woke up the morning of the Haitian Hustle and got on social media and saw people that I knew in Haiti already having run the race, it was a huge motivator. If you’ve ever been to Haiti, you know it’s hot. And it’s gross. But those guys and gals were out there running, sweating and super hot. They’re running, how can I not be running? That’s what it’s about. It’s the solidarity and the brotherhood of all being one family in Christ. We get to do it all together as one race.

Curious to find out more? We would love to talk to you about hosting a Haitian Hustle where you live. Email us at hustle@jesusinhaiti.org or call 260-302-5446 to start a conversation. We also have a guide to hosting a Hustle available on the Haitian Hustle website.