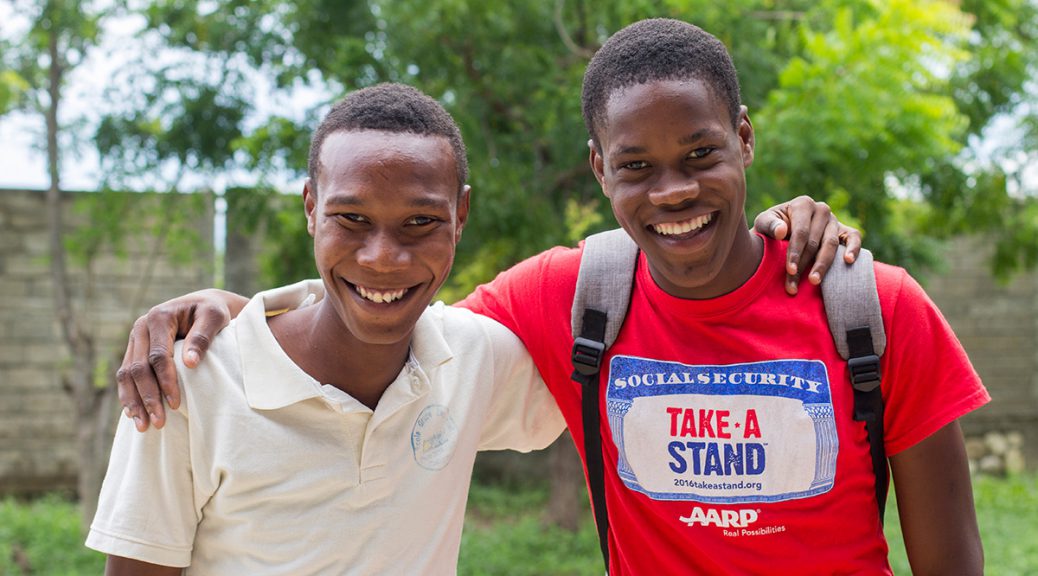 Attending university was a dream that felt impossible for Davidson Dorcénat and Steevenson Saint Louis.

After they graduated from Grace Emmanuel School in June, they applied for the college scholarship JiHM was offering to two graduates. They passed the required government exams this summer, and waited for news.

In October, they learned that they had been chosen to receive the scholarships. And at the beginning of November, these two young men, who excelled at Grace Emmanuel School and exemplify humility, started college.

The day before their classes began, they were eager to express their gratitude to all of you who have given to make these scholarships possible.

“It gives me pleasure to say thanks a lot,” Steevenson said. “I didn’t have any hope to go to university, and you chose to help me. I guarantee I’ll do my best to make you proud.”

After considering several other fields, Stevenson has chosen to study administration at GOC University. He would like to be a director at an organization or school someday, even mentioning a desire to return to work for Jesus in Haiti Ministries to repay all the help that has been given him.

Steevenson is the first member of his family to go to college. He says his mom, who never had the opportunity to go to school, is especially proud of him.

Steevenson asks for prayers that he would succeed in college. “Studies will be hard and ask a lot of me,” he said.

He currently lives on his own, and asks for prayer that he will have all he needs to succeed at school. He says his body is often weak, and he needs to have food to be strong.

“I want to thank the mission for this beautiful initiative,” he said. “It gives me pleasure that I have received the scholarship and will represent you at university.

“I will make your heart happy with the results I will give.”

After considering medicine, Davidson has decided to study agronomy instead, also choosing to attend GOC University.

He became interested in this type of work while growing up in the Artibonite valley, an agricultural area located several hours away from Grace Emmanuel School.

“I want to change the environment we live in in my country,” said Davidson. He is anxious to learn how he can work to improve the soil and growing conditions of Haiti.

Davidson currently lives in Source Matelas with two of his brothers who attend Grace Emmanuel School. Like Steevenson, Davidson is the first person in his family to go to university.

“Thanks to this mission, I’ll go to university,” he said with gratitude.

Davidson asks for prayer because “in Haiti, nothing is easy.”

But he promised, with God’s help, to do his best. “God has done lots in my life and He’s why I’m here today,” he said.

“You won’t regret your investment in me.”

We are eager to see how God continues to work in Steevenson and Davidson’s lives. It is such a delight to be able to make it possible for these promising young men to further their education to the benefit of their communities and country—thank you for making that possible.

If funds allow in 2018, JiHM plans to award two more scholarships to graduates in the class of 2018. To make a gift to the scholarship fund, give here. Each scholarship will cost between $2,000–$2,500 per year.