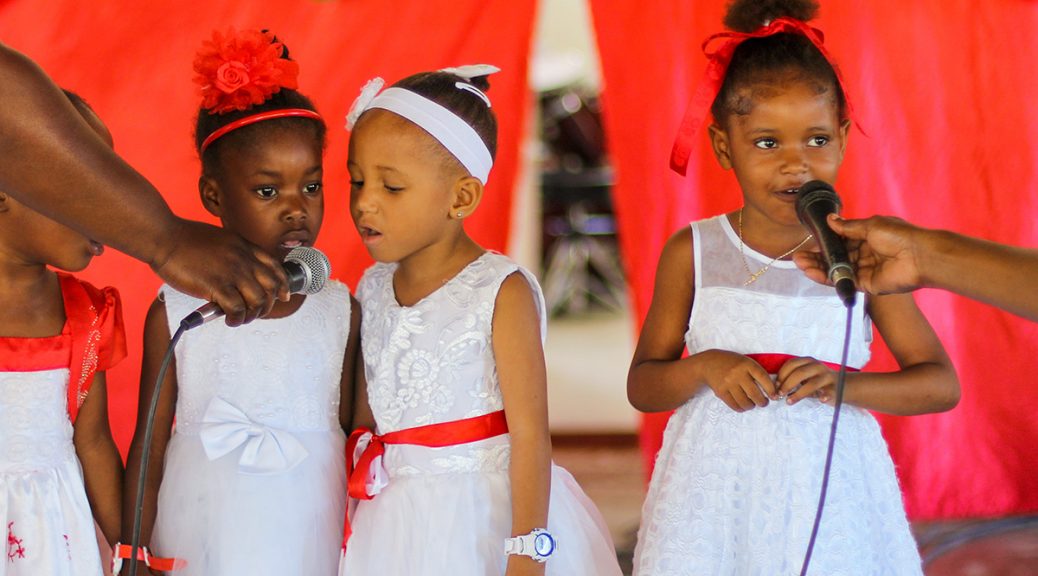 Every year since Grace Emmanuel School opened its doors in 2004, there has been a Christmas party. It’s a joy-filled day unlike any other throughout the year, with skits and dances presented by different classes, a gift given to each student, and special food and drinks. Many students say it’s the best day of the year.

Party planning begins in October, as it takes several weeks to raise gift funds, transfer them to Haiti, safely withdraw them from the bank, and then shop at many stores over multiple days to locate and transport 400 gifts for girls and boys ranging in age from 3 to early 20s.

The last few years we have wondered if the party would be possible as shopping in Port au Prince became more dangerous. But every year Grace Emmanuel School staff pulled it off.

This year, however, brought the gang violence right to the doorsteps of Grace Emmanuel School, as well as along every route that leads between GES and Port au Prince. JiHM’s leadership spent hours discussing the pros and cons of still trying to gather the students who were in the area for a party and buying gifts, but with the November 29th attack on Source Matelas, the last flicker of hope for such an undertaking faded.

Not giving up on gifts

Yet, that didn’t mean that staff was ready to give up on getting a gift to each student. Given the great needs of each family right now, they knew cash was most practical. But to distribute that much cash from a central location for so many people would have been foolish.

Virtually everyone in our communities in Haiti has a cell phone or a family member with access to one. (If that fact surprises you, don’t picture expensive cell phones with monthly plans—these are inexpensive phones with pay-as-you-go minutes.) Phones are a crucial part of Haitian society—to check if roads are open or blocked, keep up with family, etc.

Through a program developed by Digicel, the country’s biggest cell network, money can be sent to a person’s phone number. The recipient can then choose to convert the money to cell phone minutes or go to a MonCash location and cash it out. (These are kind of like Western Union locations only more numerous.)

Once the decision was made to transfer cash to students using this method, staff needed to verify the phone number for every student at Grace Emmanuel School. This often required making repeated phone calls over multiple days to the number on file until someone finally responded. (Phones are often not charged since electricity isn’t readily available, cell networks cut in and out, and phone numbers are changed often.)

At the end of December, everything was set to begin transferring $50 to each student—without physically having any cash on hand.

A little goes a long way

Of the 388 students registered for school, the vast majority were able to receive via MonCash. There was a limit each day to the amount that could be transferred, so it’s taken a few weeks to work through the list, but as of today all but about 30 students have received their gifts.

This generous undertaking (nearly $20,000) was covered by the sponsors who gave for Christmas gifts, with the extra provided by relief giving. (Since not every family has been able to travel to the mission for food distributions, this was a great opportunity for JiHM to help as many families as possible with the relief funds.)

When staff connected over the phone with the students or their parents to verify contact information, they heard many difficult stories of current living situations, especially for those who have been displaced by the violence. These conversations, while not unexpected, have been painful. The money couldn’t be transferred fast enough to alleviate some suffering.

“Every little bit of help you can give someone now is a big thing,” said Maudeline, GES secretary, “because life is very, very difficult for everyone.”

As students began returning to school this month, there was a lot of appreciation expressed for the gifts.

“I want to thank my sponsor,” said Withmarlie, a 7th grader, “because right now we are really in need of money for food and to buy some things we needed for school.”

Thank you to all who gave to make this generous outpouring possible. We are so thankful for your continued partnership to do everything you can to help loved ones in Haiti right now.