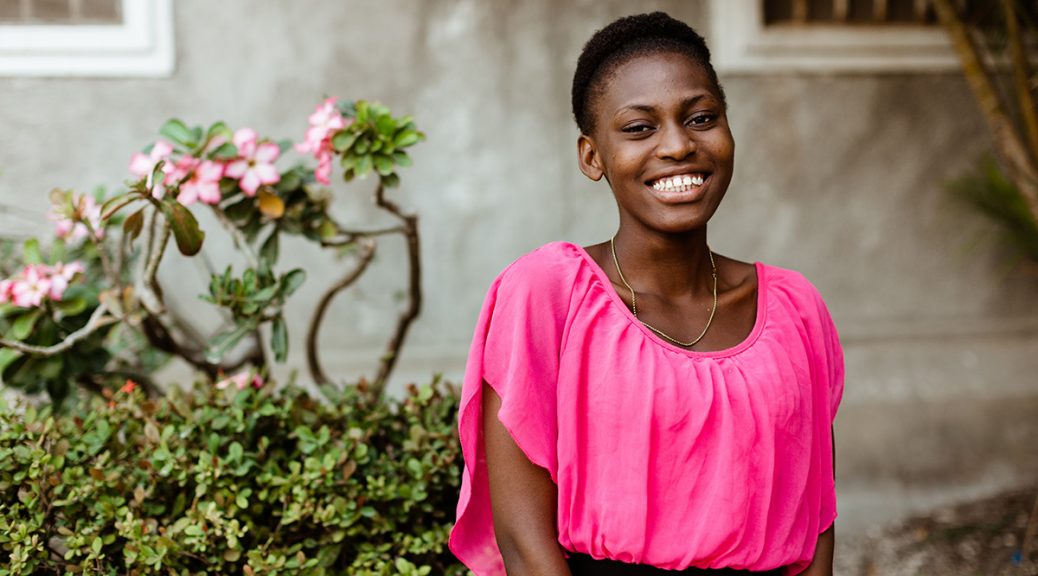 In the summer of 2012, the orphanage where Anne Marie had lived for 2 years was suddenly shutting down. There were no longer funds to support the 30 or so children who lived there, and the caretaker had begun placing the children with their extended families, friends, or really anyone who would take them.

But no one came to claim Anne Marie. She was the last one left at the end of that August. And because JiHM staff had already made a connection with her and the orphanage was just around the corner, she was welcomed into the Lighthouse Children’s Home with open arms on August 23, 2012.

Last week marked 10 years since that 9-year-old girl became part of the Lighthouse family. Over the last decade, she has blossomed into a young woman who will begin her senior year of high school on October 3, the day before she turns 20.

“I am so happy and excited to be starting my last year of high school,” she said. “I can’t believe how quickly the years have passed. I feel like I was just completing 7th grade and now I’m in 13th grade.”

The youngest of 7 siblings and half-siblings, Anne Marie was born in the picturesque beach town of Jacmel, located along Haiti’s southern coast.

Her childhood was marked by grief early on when her father passed away in a boating accident. Eventually her mother moved them from Jacmel to Bon Repos, a suburb of Port au Prince, for a job opportunity when Anne Marie was 7 years old.

Soon after, her mom became very ill and passed away in February 2010.

Anne Marie returned with her siblings to Jacmel to live with her grandmother. But her grandma was unable to provide for all of them in the way she felt they deserved. So Anne Marie, her sister Sisi, and half-brother Myken, were sent back to Bon Repos. They were split into three different orphanages, including the one that housed Anne Marie prior to the Lighthouse.

Over a dozen years after becoming an orphan, when Anne Marie is asked what has been the biggest difficulty she has overcome in her life, she simply responds, “the absence of my parents.”

Though Anne Marie has been loved well at the Lighthouse, thinks of Mama Odette as one of her heroes and has close relationships with the other kids there, a children’s home does not replace a family. Her bond with her biological family has been encouraged through the years and those relationships have provided her with strong roots and emotional stability.

Her sister Sisi, another of Anne Marie’s heroes, was allowed to live with Anne Marie at the Lighthouse for several years while she completed her nursing degree.

For many summers, Anne Marie was able to travel to Jacmel to spend time with her extended family. Her last trip, to attend her grandmother’s funeral, was just before the COVID outbreak began. She is disappointed that she hasn’t been able to visit since due to the instability in Haiti.

Still Anne Marie says she talks to nearly all of her 7 brothers and sisters every day on the phone, 3 of whom now live in the Dominican Republic. It is her siblings, she says, who are her counselors and give her the best advice. “They always tell me to keep my head on straight so I can succeed.”

Over the nearly 20 years of her life, Anne Marie has done just that, enduring many transitions and trials with grace and charisma that comes straight from the Lord. Through the years her faith in Christ has been an anchor for her, instilled in her from an early age by her grandma.

Her early years in picturesque Jacmel also instilled in her a love for the beauty of Haiti, which figures into her plans for the future.

She says she will first study economics after she graduates, because she believes that is the best route to a stable job in accounting or administration.

“After I’ve found a good job,” she said, “I will work toward what I really dream about, working in hospitality and tourism.” She wants to be able to show people the beautiful sides of Haiti, and one day dreams of owning her own hotel.

We are so proud of Anne Marie, and consider it a high privilege to have been part of her journey for these last 10 years and more to come. Will you pray for this young woman as she prepares to embark on her senior year and makes plans for her future?