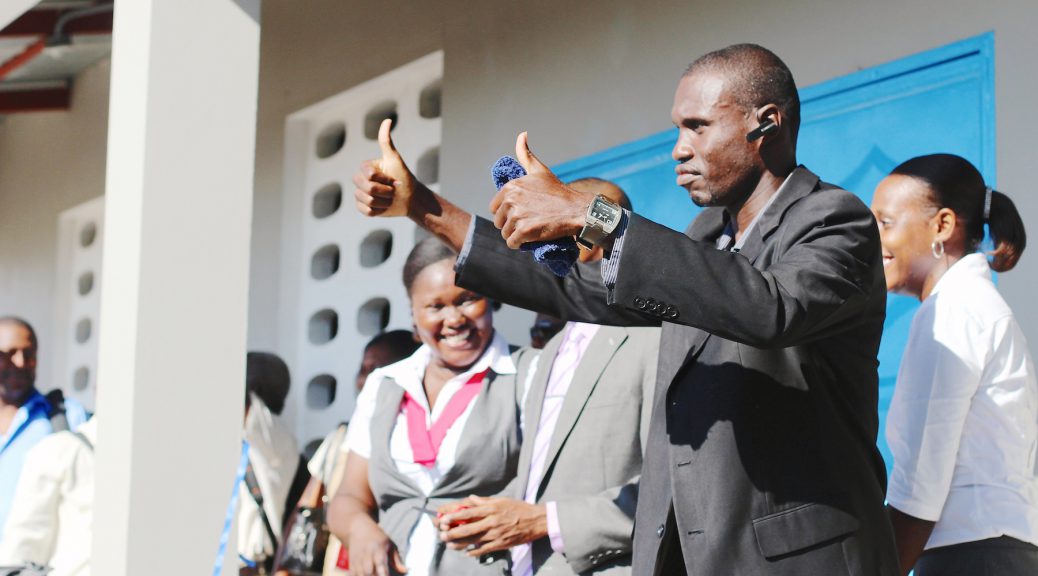 It is hard to imagine Grace Emmanuel School without Ralph Roger, who has served as the school’s dean of students for nearly a decade.

When Ralph started in March 2008, the school had less than 100 students and only went through fourth grade. He has seen the school grow to over 350 students, and move from a rented one-room building, to army tents on a barren property, to the 15-classroom structure on the hill where it sits today.

It is also hard to imagine Ralph without his older brother Roger—a man whom Ralph calls his biggest role model. “Everything I do comes from him.” Though the two share uncanny physical features and mannerisms, their similarities go much deeper than their outward appearance.

It was Roger who encouraged Ralph to become a Christian in April 1999, only four months after Roger had done so. Raised by a grandpa who served as a voodoo priest, the brothers had danced and drummed at ceremonies growing up—now they began to serve the Lord together.

Ralph recalls that he used to be grumpy and not a joy to be around. One day he asked Roger, “Why does everyone like you? How can you smile at everyone?”

Ralph tried it. Laughing, he explains, “My mouth used to make people run. I was ugly. Roger said if I did these things, my life would change. Wow. It happened. Now people say, ‘Ralph, you’re funny.’”

When Ralph and his wife Wiltha lost their first child at only one week old due to intestinal issues, it was Roger who encouraged Ralph to carry on.

“I cried a lot. I couldn’t find consolation,” remembers Ralph. Roger was there for him. “He told me to stay strong and that God can do anything. He said, ‘If you see your son die, just keep thanking God.’”

The death of his son was a test of his faith. “God was asking me, ‘Will you remain in my embrace, or will you leave?’ I had spent so much money, so much energy,” Ralph remembers.

“I wanted to be discouraged and tell God He didn’t make any sense, but I came to realize Jeremiah 29:11—God knows the plan he has for me.”

Knowing God had a plan gave Ralph and his wife the hope they needed to survive their grief. Two years later, Ralph and Wiltha welcomed a precious daughter, Emma Christie, into their family. Today she is almost 4 years old, and likes to dance, sing and take photos. Ralph’s dream for Emma is that she grows up to follow Christ and be a servant to God.

“She wants to be a model right now and I can’t tell her no. I will let her study what she wants,” he laughs.

Ralph doesn’t just have dreams for his own daughter—he dreams big for allthe students at Grace Emmanuel School. He loves knowing that his work directly blesses others. He gets to help others learn, talk to them about their lives, and encourage their futures.

“The parents are always thanking God for sending JiHM. God put this school in their path,” says Ralph with pride. “There isn’t another school like this.”