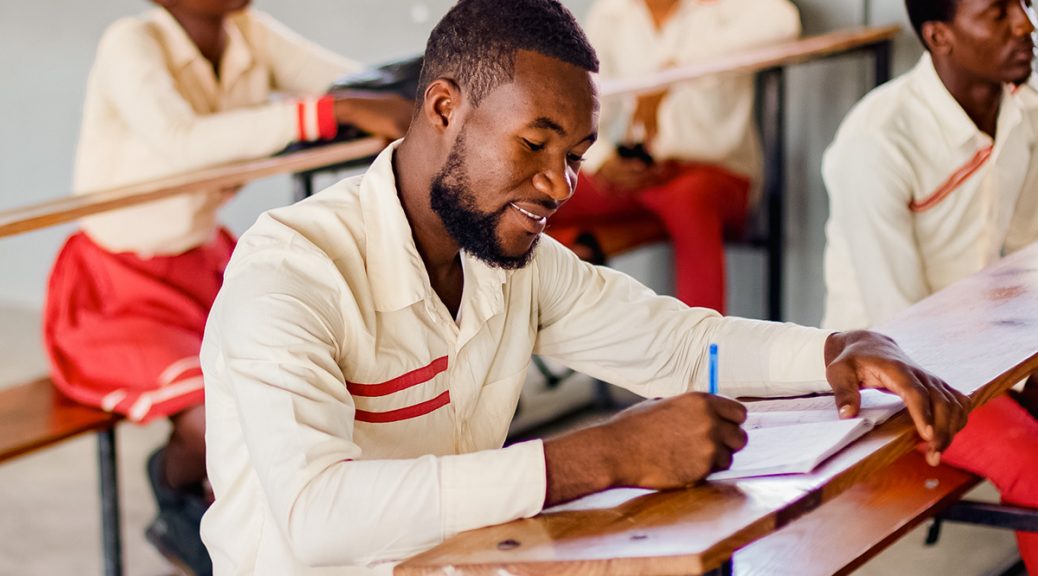 In our last newsletter, we shared the story of Nephtalie, the youngest student in the Class of 2022. This month, we bring you Gerald’s story. At 25, he will be the oldest in his graduating class this July.

Born into abject poverty in a rural village in Haiti, Gérald spent years waiting for the chance to go to school.

After eight years of struggling to meet his basic needs, Gérald’s mom sent him to live with another family in a much larger city, several miles away. She was desperate to give him a future away from the misery he had known, even if it meant being apart.

In exchange for his work around the house, the family would send Gérald to school and feed him.

For 7 difficult years, Gérald worked as a restavek* for the family. He was able to attend school occasionally, only advancing through 3rd grade.

At age 15, Gérald returned to his mom’s village. He attended 4th grade at a village school with much difficulty, searching for any other living alternative.

Though he hadn’t spoken with his dad in years, he located his dad’s sister in Source Matelas and asked her to take him in. She agreed. In 2013, he found an opening in 5th grade at Grace Emmanuel School.

At 16 years old, finding a free education at Grace Emmanuel School was the only way Gérald could continue his education.

At GES, he now received a good education, a daily meal, free transportation, and even health care support.

Every year he worked hard, and every year he passed—even the years he thought would be impossible for him, like 9th grade.

“I never thought I would be able to pass the official exam,” he said, “but I did.”

Now he is less than three months away from his high school graduation.

“During all these years, it has not been easy for me at all,” Gérald said. “As the years go by, I grow and so have my needs. But, despite the way it was, I was never discouraged.”

In order to be more self-sufficient, Gérald had worked through his years at GES, spending summer days, afternoons, and weekends working as a mason or making deliveries to construction sites.

He saved money from these odd jobs to learn more specialized trades, including screen printing and tile laying. He currently attends an English class every Saturday.

“I’m proud of Gérald,” said his aunt. “He has a lot of dreams, and he’s never stopped working hard for his dreams.”

For years, Gérald wanted to become a civil engineer, but as he nears graduation, he is feeling drawn to study judicial science and administration.

“I am full of dreams that I would like to accomplish with my life,” he said, “but the biggest thing is being able to help my family.”

He says despite how hard things have been for him, there are many more people in his family still suffering.

“Because I have known great suffering,” he said, “I want to help others as God gives me the opportunity, so they won’t know the same path of misery as me.”

We are so proud of Gérald for never giving up on his goals, and can’t wait to celebrate his graduation this summer.

What is a Restavek?

An estimated 150,000–300,000 children in Haiti face a similar fate as Gérald. Known as restavek (which in its French derivative translates to mean, “to stay with”), a child serves as a domestic servant for a host household and is sent from a rural, low-income family to live with and work for a family in exchange for enrollment in school. They are tasked with manual labor including fetching water, hand-washing laundry, preparing meals, caring for other children in the home, etc. The system was created with the intent to support impoverished children to give them access to an education but they are more often treated as slaves, abused and forced to work far beyond a child’s capacity.

At Grace Emmanuel School, we serve many students who have come out of this type of situation, a few who we suspect might still be enduring it, and many others who may have been forced into such a situation without the provision of a free education.