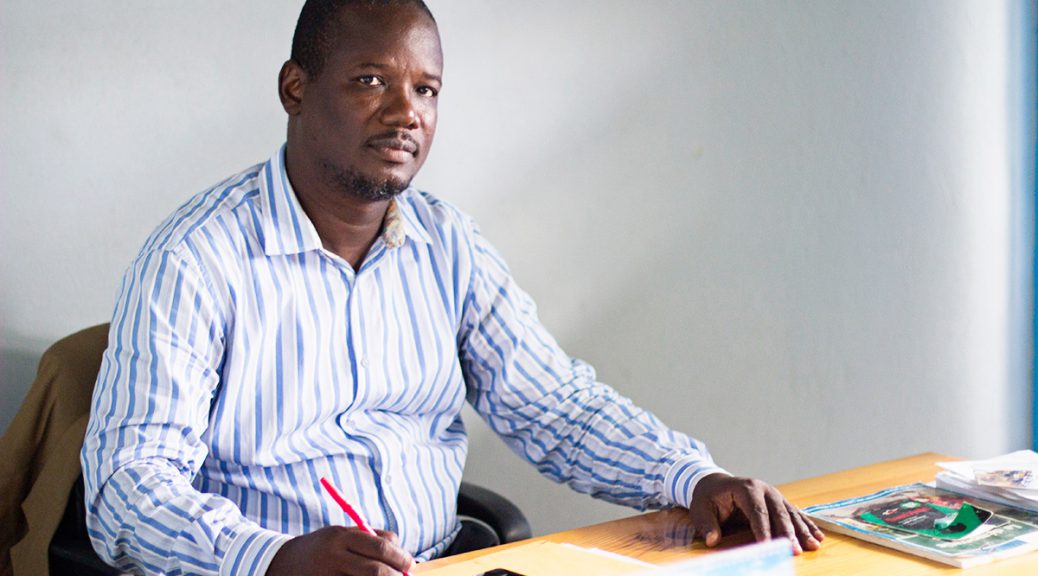 Three years ago, Andris Sanon was living in Bon Repos, a suburb of Port-au-Prince, with his two teenage sons and his wife, Elise. As he had for 20 years, Andris was teaching at the government school in Source Matelas, commuting 11 miles to work each day. They were content with their home, their church, and their life.

But one fateful night would change everything.

The Night the Thieves Came

After picking his wife up from a meeting at church on a Saturday night in January 2015, Andris sat in their yard, looking up at the moon and enjoying the evening. Around 9 pm, he heard gunfire in the distance. Elise called for him to come inside, so he followed orders, went inside, and went to bed.

A few hours later, he awoke to a noise outside the house. Looking out through the window, he saw a group of men with guns kicking down the door at a neighbor’s house. He phoned the police. They said they were on their way.

The thieves headed toward his house, climbing over the security wall and kicking out the lights. They shot toward the house, first at his room and then the room where his sons slept. They began to bang on the front door, shouting “Open the door!”

The thieves persisted until they got the door down, bound up and beat Andris at gunpoint, and made off with the money for his son’s school he had just withdrawn the day before at a local bank.

The event shook Andris to his core, and he soon after moved his family back to Source Matelas, where both he and Elise had grown up. 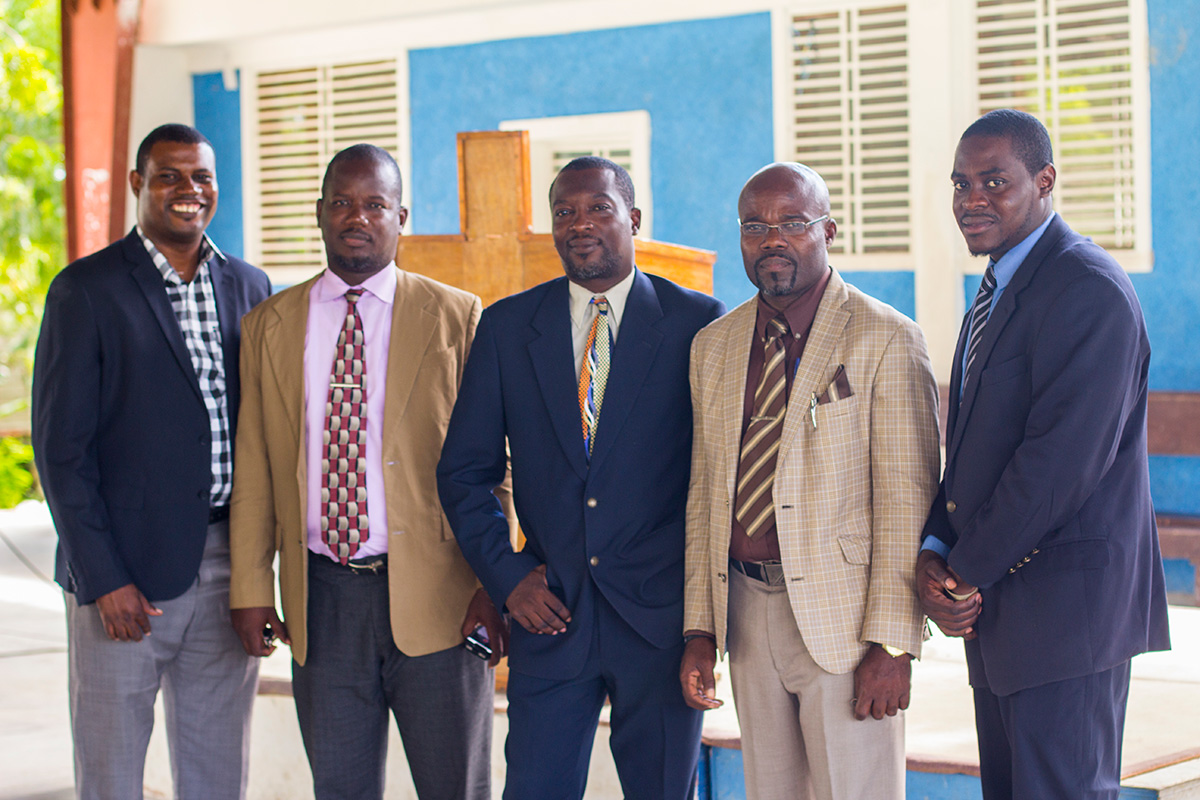 Andris (second from left) with the pastoral staff of VBC. Pastor Dieuvert (right) is a former student of Andris.

Once his family settled in, they began attending Victory Bible Church, and with his background in theology, he was asked to join the leadership of the church. Shortly after, the director position opened up at Grace Emmanuel School. Andris interviewed and was chosen.

After spending 20 years of his career at the government school in the same community, Andris quickly noted a big difference between working at a poorly-funded state school and Grace Emmanuel School. Due to undependable pay, teachers are often absent at the state school, so children sit in empty classrooms whenever the teachers are on strike. At GES, the teachers are always paid on time and always at school.

In addition, students at state schools in Haiti have monthly or quarterly fees to pay. If they don’t pay, they sit out of school the rest of the month.

“It’s different in every way,” Andris said. “Grace Emmanuel School helps the students completely. We have lots of students who wouldn’t have hope for education without this school.”

Beyond just providing an education, Andris was immediately impressed by the holistic services that students receive.

“There isn’t another school in our area like it,” he said. “The students receive food, transportation, books, visits, and help with hospital visits and funerals.

“We are premiere in our community. There is not another mission like this.”

As director of the school, Andris believes it is his responsibility to live a life that is worthy of emulating.

“I have a responsibility to these students, to teach them to respect God, and respect people. That is how I was raised,” he said.

Andris rises early every morning to get to school by 7 am, setting the tone by arriving before everyone else. He believes if he wants all the students to respect the principles of the school, he must model them.

“As Christians, we are models. We preach with our behavior.” 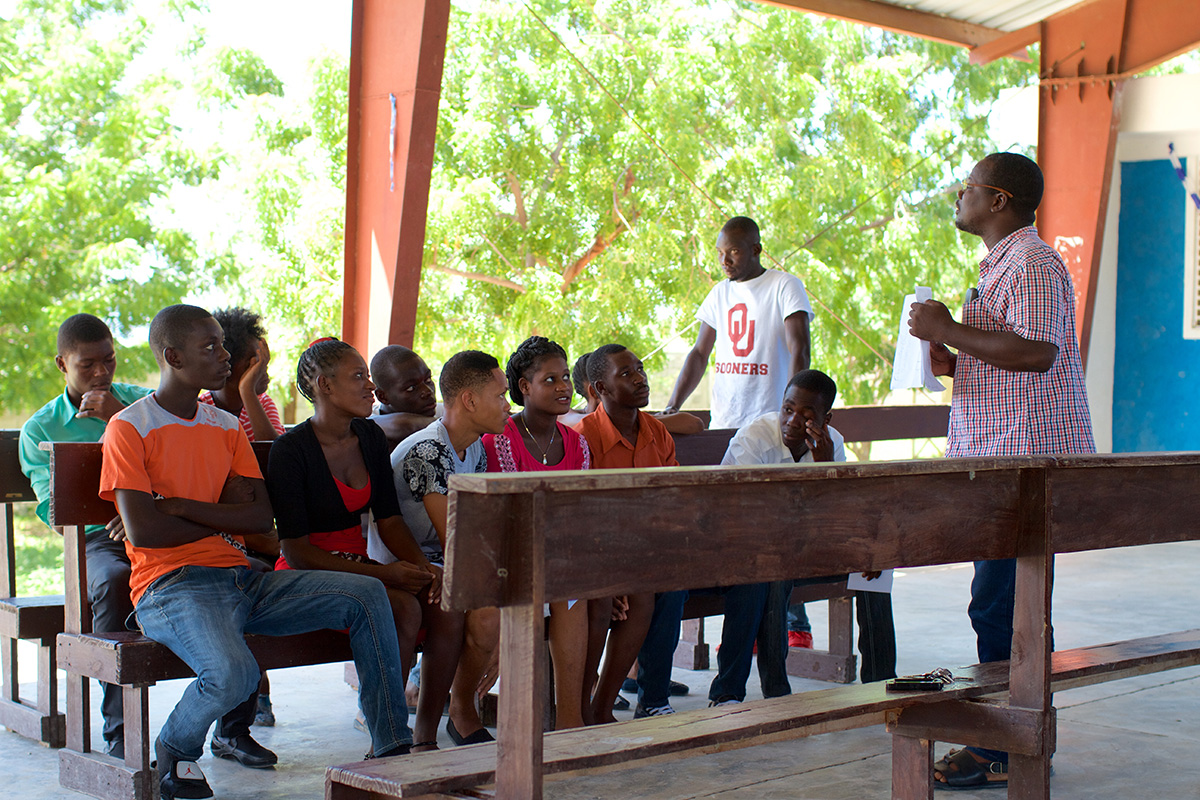 As Andris looks to the future of Grace Emmanuel School, he has big dreams to continue improving its facilities and services.

“We need a second bus. A computer lab. A library. A laboratory for chemistry and physics.

A message of thanks

Andris wanted to send a message to everyone who sponsors students or otherwise supports Grace Emmanuel School:

“I congratulate you on your collaboration. What you are doing is important for the community. I ask God to bless your family, give you health to work, to succeed and have victory in all you do.

“When you’re serving others, God is close at hand, ready to help the weak.”