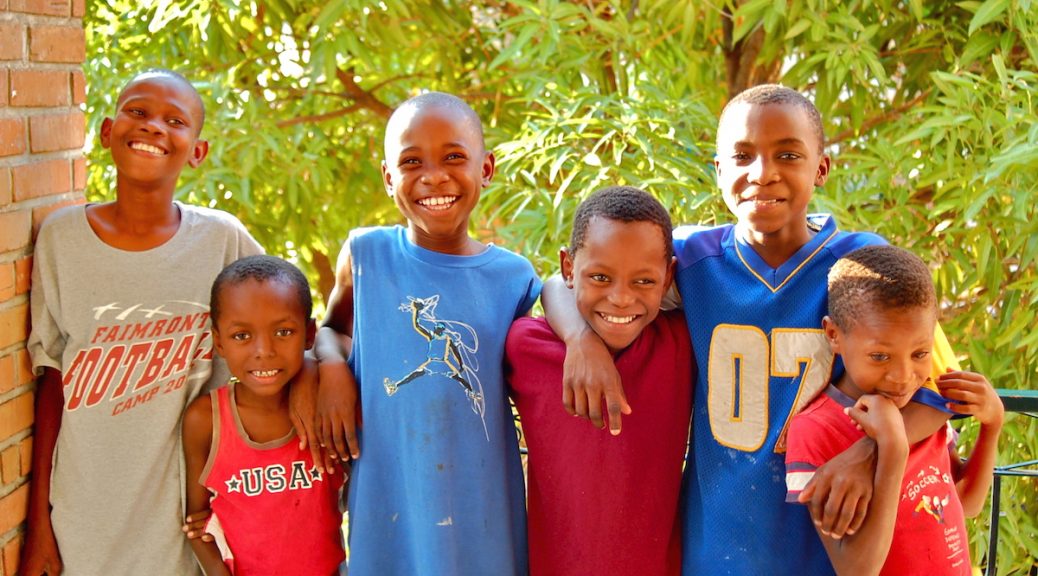 Earlier this month, Haiti commemorated the 10th anniversary of the earthquake that took so many lives, destroyed so much property, and left so many scars.

The earthquake also marks ten years since the Lighthouse opened its doors to several children who needed a future.

For these children, the 10th anniversary was an opportunity to reflect on the events of their lives. Each child was asked to choose just one word to sum up their time at the Lighthouse.

Kimberly came to the Lighthouse in 2010 following the death of her mother in the earthquake.

“Before, I was a young girl who was tormented and very sad,” she remembers. “Now I feel more peaceful and more confident.”

Kimberly’s word for her decade at Lighthouse is “courage.” Read more of her story.

Robenson also arrived in 2010 after losing his mom in the earthquake. He was very shy, a bit angry, and bothered by others around him.

“I reacted a little harshly with my loved ones,” he says. “I had great difficulties at school, and I couldn’t even read well.

“Now look at me,” he says, smiling. “I am a handsome man, wise and cool. I’m always smiling, and I’m more at ease with others and more tolerant. I have made progress in school.”

Robenson picked the word “change” to describe his last 10 years.

Anne Marie, who joined the Lighthouse family in 2012, says that it was not easy at the beginning. She was sensitive and very fragile, and would find herself crying over everything.

“I was always feeling hurt,” she remembers.

“But since I was baptized, I have started to accept myself,” Anne Marie continues. “Before I had a hard time accepting criticism and took it personally, but today I take it as remarks to help me to improve myself. I am very confident.”

Anne Marie’s word for these seven years is “maturity.”

Peterson has been the responsibility of JiHM since early 2009, becoming a part of Lighthouse when it was created in 2010.

“I was shy. I didn’t speak too much,” he says of his earliest memories. “I couldn’t share my feelings with others, and didn’t know how to talk about what I liked or my difficulties.”

“Now I’ve discovered myself. I learned to share my humor with others, my friends at school, and other members of the Lighthouse,” says Peterson. “Sometimes I am surprised when I make them laugh a lot. I feel like a hero.”

Peterson’s word for all of his years at Lighthouse is “satisfaction.”

Adriano, like Peterson, has been cared for by JiHM since 2009, joining the Lighthouse in 2010.

“I didn’t talk too much,” he remembers. “I don’t know that I was shy, but I often stayed away from people and had few friends. Today, I enjoy spending time with others. I have made friends and share a lot of good things with them.”

Adriano’s word for these years is “progress.”

Johnny, like his brother, Peterson, has lived with JiHM since 2009, when he was 2 years old. He doesn’t remember life before Lighthouse.

“I have always applied myself in my studies,” he says. “I’ve grown in faith. Every day I learn more about what I can achieve, and I do it. I have never had any particular difficulties.”

Fedner was the last of the Lighthouse kids to arrive, joining us in 2014.

“I was very energetic, and liked to tease,” he recalls. “I made jokes that others did not like and they sometimes became mad, causing conflict between me and those I loved.

“I’ve learned to be more attentive to everyone’s feelings with my sense of humor, and I try to understand that not everyone is as enthusiastic as me.”

Fedner says if a word could sum up these 5+ years of his life, it would be “understanding.”

Even if it was not an easy exercise, it was a great way for each child to look back on their lives and see the grace of God towards them, to help them learn to trust that with faith, everything will be okay.